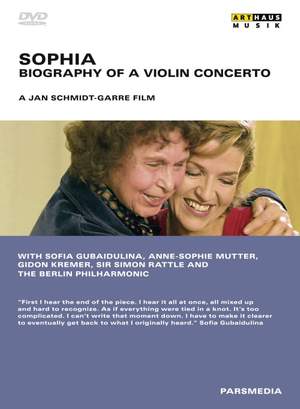 it's the polarity of composer and performer that is the kernel of the film: Mutter cool, sveltely glamorous and severely practical, Gubaidulina looking more and more like a rumpled Babushka but... — BBC Music Magazine, June 2011, 4 out of 5 stars More…

In August 2007, Anne-Sophie Mutter performed the world premiere of Sofia Gubaidulina‘s 2nd violin concerto in Lucerne with conductor Simon Rattle and the Berlin Philharmonic. This piece by the Russian composer (born in 1931) was an important event in many respects. Sofia Gubaidulina is one of the world‘s leading contemporary composers. Her international breakthrough came in 1980 with her first violin concerto, Offertorium, which she wrote for Gidon Kremer. To this day, it remains her most often performed piece. In spite of all the other pieces she has written in the meantime, it is her second violin concerto that violinists, conductors and orchestras around the world have eagerly been awaiting, especially since she was commissioned to write it in 1992 by Paul Sacher, the Basel conductor and patron of the arts. It was his wish that Gubaidulina‘s new violin concerto first be performed by Anne-Sophie Mutter. Fifteen years later, that dream finally came true.

The film focuses on the piece - from its inception, through the many stages of the creative process to its world premiere but also features the many great expectations of the music world and the resulting pressure on Gubaidulina. It’s not the usual portrait of the composer but concentrates on the work in progress and documents the collaboration between Anne-Sophie Mutter, Simon Rattle and the Berlin Philharmonic.

"First I hear the end of the piece. I hear it all at once, all mixed up and hard to recognize. As if everything were tied in a knot. It‘s too complicated. I can‘t write that moment down. I have to make it clearer to eventually get back to what I originally heard." Sofia Gubaidulina

"The most beautiful music film I have ever seen." Joachim Kaiser

it's the polarity of composer and performer that is the kernel of the film: Mutter cool, sveltely glamorous and severely practical, Gubaidulina looking more and more like a rumpled Babushka but eloquent (in German and Russian) on matters spiritual...it's an absorbing, interesting, at times touching study of aspects of the creative process..I liked the piece anyway, but I felt I now had a greater understanding and appreciation of it

This documentary, which feels curiously like an old-school South Bank (and I mean that as a compliment), traces the progress of this new violin concerto...[Gubaidulina] wears her heart on her sleeve and has plenty to say about how she structured her new concerto around her proportion of a Bach chorale...And there are intriguing insights into other personalities