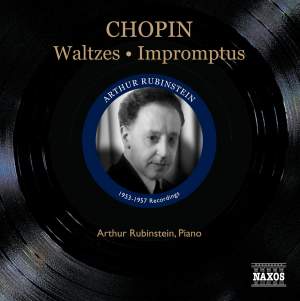 This volume continues the Naxos series of Rubinstein’s ‘middle period’ Chopin recordings, begun with the Piano Concertos (8111296) and followed by the Polonaises (8111346). Because the HMV/Victor catalogue already included Cortot’s complete traversal of the Waltzes (8111035), Rubinstein set down only two of them on shellac before making this complete recording in 1954. He had made previous recordings for RCA of two of the Impromptus (Opp. 51 and 66) before taping the four new versions heard on this disc.

this earlier version is wistful and whimsical, and impeccably tasteful.

Try Waltzes Nos 3, 7 and 13...and you will realise that no other pianist has captured more subtly Chopin's unique blend of classical bias and romantic freedom. Here in particular you note an elegance and insiunation devoid of all sentimentality, neurosis or self-serving idiosyncrasy.