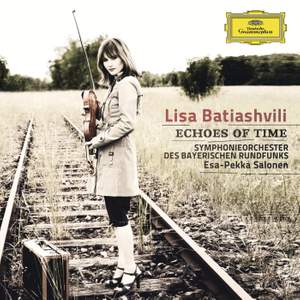 [the Shostakovich] receives a deeply considered interpretation, its emotional narrative vividly etched by both soloist and conductor...Batiashvili begins the Cadenza in deep contemplation but... — BBC Music Magazine, April 2011, 5 out of 5 stars More…

Shostakovich: Dance of the Dolls

Recording of the Week,  Lisa Batiashvili - Echoes of Time

The Georgian violinist makes her debut on Deutsche Grammophon with a program of works by composers whose lives and music were influenced by political upheaval in the former Soviet Union, including Shostakovich, Kancheli and Pärt.

Lisa Batiashvili’s debut album for DG, ‘Echoes of Time’, is a matter of the heart - Lisa focuses her program on composers whose lives and work have been heavily influenced by the political happenings in former Soviet Union. Inspired by personal experience, Lisa, herself, went into German exile with her family during the political upheaval in Georgia in 1991.

The program spans the whole of the 20th century, classics by Shostakovich ‘Waltz from the Doll’s Dances’ and Rachmaninov’s ever popular ‘Vocalise’, are combined with Georgian composer, Giya Kancheli’s ‘V and V’, and Estonian, Arvo Pärt’s ‘Spiegel im Spiegel’. ‘Spiegel im Spiegel’ was written shortly before the composer went into exile.

For Pärt’s ‘Spiegel im Spiegel’ and Rachmaninov’s ‘Vocalise’ Lisa teams up with one of our DG’s most distinctive pianists, Hélène Grimaud. Esa-Pekka Salonen conducts the Symphonie orchester des bayerischen.

[the Shostakovich] receives a deeply considered interpretation, its emotional narrative vividly etched by both soloist and conductor...Batiashvili begins the Cadenza in deep contemplation but quickly ratchets up the tension driving us irresistably towards the 'Burlesque', dispatched here with venom and rhythmic drive.

few if any [recordings of the Shostakovich] are finer than this one...Batiashvili's reflective, almost weightless approach in the opening Nocturne...is rendered more distinctive by the resonant acoustic of the empty Herkulessaal...the passacaglia is exceptionally poised and the cadenza more sheerly musical than usual. The finale whizzes to its end without undue triumphalism.

I will risk accusations of heresy by saying that this new recording of the Shostakovich Concerto make a btter case for the work than its premiere recording...Batiashvili's playing strikes me as more personal than Oistrakh's, and she seems more willing to dive into its bleakness, its black humour and its frayed nerves. She plays like a protagonist. At the same time, Batiashvili conveys these emotional states without sacrificing an iota of her gorgeous tone.

It's a marvellous performance [of the Shostakovich], suitably crepuscular in the opening "Nocturne", before a Gypsy flamboyance takes over for "Scherzo". Salonen proves the perfect accomplice in realising the album's theme of works reflective of the Soviet era, the programme including pieces by Soviet emigrés Arvo Pärt and Giya Kancheli

[Shostakovich's] No. 1, Op 77 is the chief work, played with majesty and poetry on this soulful, mixed repertoire recital disc...This DG debut disc confirms Batiashvili as a powerful musical voice with an exciting future.

Batiashvili is matched in emotional intensity by the Bavarian orchestra and Salonen, as she is in the inspirational way that Shostakovich’s palette of colours is so purposefully deployed.