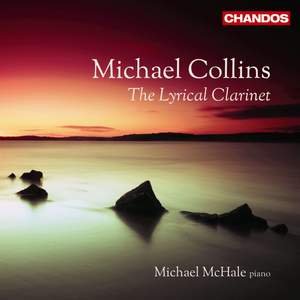 It's hard to imagine this varied programme better played than by Collins and Michael McHale. They're technically impeccable and stylistically flexible, and, aided by an unobtrusively excellent... — BBC Music Magazine, April 2011, 5 out of 5 stars More…

Michael Collins, the virtuoso clarinettist and exclusive Chandos artist, returns for a second volume in Chandos’ series showcasing the extraordinarily wide range of music written for his instrument. The first volume, The Virtuoso Clarinet (CHAN10615), was described by International Record Review as: ‘…an absolute charmer, most beautifully played… difficult to imagine a finer performance than that given here.’

Accompanied by Michael McHale on the piano, Collins here explores the lyrical qualities of the clarinet in a programme comprising a widely varied repertoire. One of the prime qualities of the instrument is its likeness in tone and range to the human voice, which has inspired composers to write aria- and lyric song-like pieces for it.

Baermann’s Adagio in D flat perfectly illustrates the clarinet’s capacity for sustained lyric melody, taking on the character of an operatic aria, the clarinet’s soulful line interspersed with sudden bursts of bravura. Though once ascribed to Richard Wagner, the piece is now acknowledged as being by Baermann, widely recognised as one of the greatest clarinettists of his time.

Among the other key works on this release is Saint-Saëns’s four-movement Clarinet Sonata in E flat. A very late work, it is one of three woodwind sonatas composed shortly before the composer’s death in 1921. In this work too, the clarinet appears at its most lyrical, not least in the refined and songful opening theme; as quicker and more extrovert music takes centre stage, the movement exploits the full virtuoso potential of the clarinet.

The Clarinet Sonata of 1962, one of Poulenc’s very last works, was dedicated to the memory of Arthur Honegger, a fellow member of the ‘Groupe des Six’ in the 1920s, who had died in 1955. This accounts for the intense sense of sadness and loss in the first movements. However, the finale offers relief from the sombre mood, capturing a kaleidoscope of witty, agile, and highly rhythmic ideas right up to the dramatic conclusion.

It's hard to imagine this varied programme better played than by Collins and Michael McHale. They're technically impeccable and stylistically flexible, and, aided by an unobtrusively excellent recording, they both produce some beautiful pianissimo playing.

A highly engaging programme from Michael Collins, whose rare combination of tonal mellifluousness and virtuoso flair brings a satisfying unity to a wide range of styles.

This disc, in all the varied items, again demonstrates the magnetism and sheer beauty of his playing, whatever the idiom...a fine recital, vividly recorded to match the inspiration of the playing.

Collins plays [the Five Bagatelles] with much affection...overall I enjoyed these performances greatly.