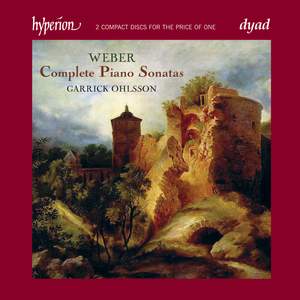 Weber, best known for his operas today, was also a very fine pianist and he wrote a sizeable body of piano music of which the four sonatas are the centrepiece. These are perhaps the first truly ‘Romantic’ piano sonatas and were a great influence on the succeeding generation of German composers such as Mendelssohn and Schumann; all are large scale and virtuosic and their quality makes it surprising how rarely they have been recorded. The set also includes the most important of Weber’s other piano works including the once hugely popular ‘Invitation to the Dance’, a work which has become better known in the orchestration of Berlioz.

‘These are distinguished performances, by a pianist of true romantic temper, of four works that have had more than their share of misunderstanding from performers and critics alike’ (Gramophone)

Garrick Ohlsson is the pianist, acclaimed for his performances of Brahms and Chopin on Hyperion. These delightful recordings were originally released on Arabesque.