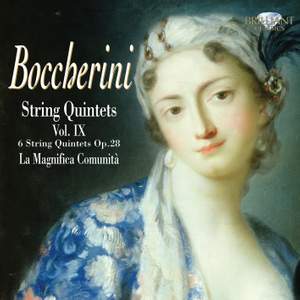 A much-underrated composer, Luigi Boccherini (1743-1805) was one of the leading composers of the late 18th century, a friend and colleague of both Haydn and Mozart, and a formidable cello virtuoso. His reputation was such that he was nicknamed ‘Mrs Haydn’ – not in a pejorative sense, the appellation was due to his music sounding Haydnesque, but with a sensual, feminine grace rather than the Sturm und Drang of his Austrian friend’s music.

Although his cello concerti and some of his symphonies remain in the repertoire, it is his chamber music that his reputation today rests, especially the quintets. Boccherini championed this genre, and it was his example that inspired Mozart to compose his quintets. The Op.28 set was composed in 1779 in the Spanish town of Candelada, a time when Boccherini had fallen out with King Carlos III, and was in exile, though still employed by the Infante Don Luis. They are all large-scale 4 movement works.

There is much innovation here – the cross-referencing of movements in these works creates a ‘cyclical’ design. The D minor work (No.5) is a sombre foil to its fellow works, and no.2 bears the inscription ‘Della Disgrazia’ (of his disgrace), a reference to his exile. No.4 has an especially taxing cello part, and No.6 a wonderfully graceful slow movement and a brilliant folk music inspired finale. This is brilliantly written music by a masterful composer at the peak of his creative talent.