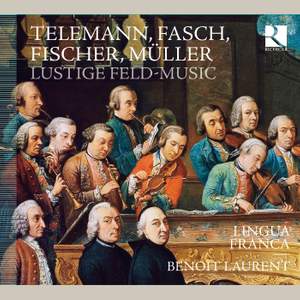 In this, their debut recording, the 10-piece Lingua Franca give performances in which expert ensemble-playing, a reliable feel for style and a warm, soft-edged sound happily combine to offer... — Gramophone Magazine, May 2011 More…

Fischer, J: Suite in A Minor

Tafelmusik, Suite in A Minor: I. Ouverture

Due to a strong French influence at the beginning of the 18th century ‘bandes de hautbois’ were frequently present in the German courts. These instruments were initially intended for the performance of military and ceremonial music but soon began to take part in more courtly entertainments. A particular style of music was used in compositions for these instruments, as it was also in works for newer instruments, one of these being the oboe da caccia that Fasch employed as the solo instrument in a concerto that has only recently come to light.

In this, their debut recording, the 10-piece Lingua Franca give performances in which expert ensemble-playing, a reliable feel for style and a warm, soft-edged sound happily combine to offer the listener a relaxing and rather mellow pleasure

there is a surprising degree of variety in timbre throughout the programme...I assume they are mostly young musicians. There is no hint of inexperience, however, in their suave, warm and sophisticated playing...This is an auspicious first recording by Lingua Franca and a must for lovers of Baroque wind music.