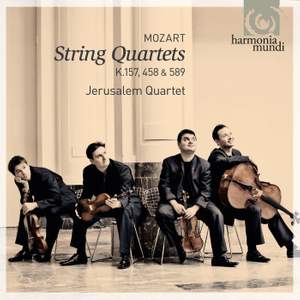 After two widely acclaimed Haydn releases, the Jerusalem Quartet now turns to an exploration of Mozart and three distinct periods in his creative life. Haydn is not totally absent from this recording, since the central quartet belongs to the glorious group of six which Mozart, now firmly established in Vienna, dedicated to his elder in 1785. Twelve years earlier, the teenage composer was still amusing himself with the Sammartinian model in the third of his ‘Milanese’ Quartets’ and four years after the ‘Haydn’ set, Mozart abandoned the divertimento style once and for all, presenting in the second of the ‘Prussian’ Quartets a score that radically renewed the practice of chamber music.

The Jerusalem Quartet was founded in 1993, and began its training in Jerusalem, under the direction of the violinist Avi Abramovitch. The young quartet soon became a force to reckon with on the international scene: in 1996 it won First Prize in chamber music at the Jerusalem Academy, and in 1997 a double prize at the Graz International Competition for its performances of works by Kurtág and Bartók. From 1999 to 2001 the quartet received support from the BBC (as BBC New Generation Artists), then in 2003 it was the recipient of the first Borletti-Buitoni Trust Award.

The Jerusalem Quartet is now a regular guest on major European and American concert platforms. It took part in the Vancouver Recital Series, the Verbier Festival and the Robeco Summer Concert Series in Amsterdam. In 2007, it toured in Australia and Japan. It is Musica Viva’s Quartet-in-Residence from 2006 until 2009 (Australia).

The Jerusalem Quartet regularly partners Mitsuko Uchida, Jessye Norman, Daniel Barenboim, Elena Bashkirova, Tabea Zimmermann, Natalia Gutman, Itamar Golan, Boris Pergamenshikov, and the Vermeer and Pražák Quartets. With harmonia mundi, the quartet has recorded works by Dvořák (with Stefan Vladar), Shostakovich, Haydn and Schubert, and has been awarded several international distinctions including a BBC Music Magazine Award for their Shostakovich with Editor’s Choice and BBC Choice for their ‘Death and the Maiden’. The Quartet is grateful to Daniel Barenboim who generously loans Jacqueline du Pré's ‘Sergio Perresson’ cello to Kyril Zlotnikov.

Tempos [in K157] are admirably judged and the interaction between each individual line sounds totally natural...The Jerusalem Quartet's approach, balancing full-blooded tone with exemplary contrapuntal clarity and a sure sense of structural direction, brings even greater musical dividends in the two mature quartets.

four superb musicians playing much in the Russian/central European tradition of full-blooded beauty of tone, they're well matched and evidently comfortable together in a close-knit ensemble. Their fine balance, musical 'discussion' bewteen players and evident passion for the music are all top-notch.

These artists aren't stratified. Bowing varies from precise attack to breathy delicacy; and lines are supple, contoured through flexure of phrase and the easing or tightening of pace without ever disrupting pulse. Sound and balance throughout is realistic

These are commanding readings: virtuosic in their pin-point accuracy of intonation and exceptionally clean articulation of the rapidly executed passages, aptly animated in faster movements and tonally attractive while avoiding a wide vibrato...[the Jerusalem's playing] is straightforward, free from mannerisms and rhythmically sturdy yet never rigid.

immaculate, spirited playing...Phrasing is expressive but natural, tempos are unhurried (the music has space to breathe) but always animated by the vital spring of the rhythms. These exhilarating and satisfying performances made me wonder how I could ever have imagined that the Hunt is inferior to the other quartets Mozart dedicated to Haydn

Passion, precision, warmth, a gold blend: these are the trademarks of this excellent Israeli string quartet...Highlights? The finesse of phrasing in K458’s minuet; the exquisite tone of the ensemble’s cello (formerly played by the great Jacqueline du Pré); and the slow movements that reach ever deeper into Mozart’s heart.