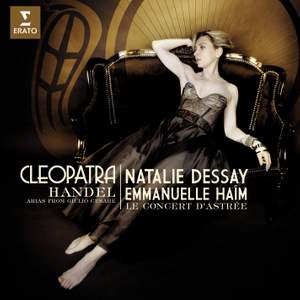 At the Paris Opéra in early 2011, Natalie Dessay takes on a new starring role: Cleopatra in Handel’s Giulio Cesare, now the most popular of all the composer’s stage works. The many facets of the Egyptian queen – captured by Shakespeare in the phrase “infinite variety” – are depicted in a sequence of contrasting arias, both lyrical and brilliant, making the character a superb showcase for the French soprano’s talents as a singing actress.

Conducting the impressive cast and the period-instrument orchestra Le Concert d'Astrée at the Opéra – and on this new recording of excerpts from Giulio Cesare – is Emmanuelle Haïm, who first collaborated with Dessay in the late 1990s; both artists were involved in a Paris production of Handel’s Alcina, Haïm as répétiteur (for William Christie) and Dessay in the sparkling role of Morgana. Since then, the two have developed a close working relationship which has produced a number of Virgin Classics recordings, including several works by Handel: cantatas (in a collection called Delirio), the Dixit Dominus and the oratorio Il trionfo del tempo e del disinganno, a recording which left the French magazine Diapason “looking forward to Emmanuelle Haïm’s next exciting Handelian adventure”.

Dessay describes Haïm as the metteur en scène – the stage director – for her voice, while Haïm describes Dessay’s voice as “an exceptional instrument which can take on a thousand forms ... Its virtuosity and flexibility make you forget all the difficulties presented by the music.” Haïm goes on to say that: “Handel is the composer for the voice. He demands special qualities that Natalie possesses: an ability to create colours, to embody words in song and to let the imagination speak.”

Reviewing Il trionfo del tempo e del disinganno, Le Monde de la Musique observed that “the virtuosity and rich palette of Le Concert d’Astrée enable Emanuelle Haïm to match the colours and tempo to the emotion expressed”, while the New York Times wrote that: “Ms. Haïm directs the superb Baroque orchestra Le Concert d'Astrée in a fleet, immaculate performance that dances among airy, profound and sensuous moods. The excellent quartet of singers is led by the radiant, bright voice of the soprano Natalie Dessay, whose rapturous Bellezza traverses innocence, defiance and penitence by way of some impressively agile coloratura. ’Tu del ciel ministro eletto', her spare, haunting final aria with plaintive violin accompaniment, is glorious.” In Britain, the The Sunday Times found that “Natalie Dessay dazzles in Beauty’s arias – she is gorgeous in the sublime penitential concluding number … With Haïm conducting with élan, this is the best available version of this glorious score.”

Dessay's sheer skilfulness comes across unscathed, not least in the later big outpourings of suffering

The performances are consistently attractive...Dessay's singing is never less than dazzling, and the stratospheric ornaments in the da capo of "Venere bella" are softly sensual.

It is true that Dessay's vocal mechanism no longer works with the pearly fluidity of her younger self, but her artistry has never been more spellbinding...at her best Dessay is up there with the great Handelians, the most compelling Cleopatra in my experience since the unforgettable Valerie Masterson

This recording is an incredible achievement. Dessay engages with her character superbly and you can really tell what she is feeling in each aria. Dessay’s voice is crystal clear and devastatingly accurate and her coloratura is honey-toned and sweet. She is really well supported by Le Concert d’Astrée under Emmanuelle Haïm, and together they achieve some fantastically dramatic moments.