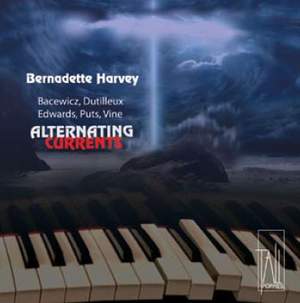 Bernadette is one of the best Australian pianists with a scarily accurate technique, a fearless approach to the nuances of the music she plays, and an ability to make clear at first hearing the intentions of the composer.

The five works she has chosen for this recording show the range of her interests: the Dutilleux Sonata is one of the best piano works from the 20th century - very French and very brilliant; Kevin Puts’ Alternating Current is demanding on many levels, but always pianistic; Ross Edwards’ Etymalong explores the meditative qualities of nature; the Bacewicz Sonata is an explosive tour de force; Vine’s Bagatelles are by turns cheeky and virtuosic. A pianist has nowhere to hide in this program, and Bernadette responds magnificently to the varying demands of this music.