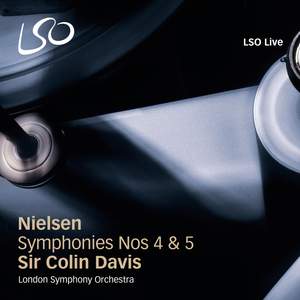 [Davis] matches Herbert Blomstedt when it comes to grandeur and sense of the long evolving line, and yet the music also seems to fluid and changeable, and alive on so many levels. Full marks... — BBC Music Magazine, March 2011, 5 out of 5 stars More…

Recording of the Week,  Nielsen Symphonies from Colin Davis and the LSO

At the grand old age of 83, the British conductor ventures into new territory by embarking on a complete cycle of symphonies by the Danish, whose music he has only rarely conducted in the course of his long and illustrious career.

Despite having been an admirer of the music of Danish composer Carl Nielsen for many years, Sir Colin Davis has rarely conducted any of his works. Now, at the age of 83, Sir Colin embarks on a complete cycle of the composer’s symphonies.

Although Carl Nielsen is frequently compared to his near contemporary Jean Sibelius, each composer’s music is equally individual. Both were celebrated symphonists but used the potential of an orchestra in different ways. Despite giving titles to the majority of his symphonies, Nielsen was often vague about the specific themes for each work. However his music is always direct, dynamic and lyrical.

Sir Colin’s traversal of the symphonies began in concert in 2009. He will conduct the remaining symphonies in 2011 with two further LSO Live releases following in 2012.

“Nielsen’s music could have been written for the LSO: the orchestra’s robust sound and free-spirited temperament suit this symphony’s virtuoso demands and visceral dynamism.

Davis, too, is attuned to Nielsen’s brand of Beethovenian conflict. Davis conducted it with the vitality of someone worthy of the symphony’s title, the ‘Inextinguishable’” Financial Times

“Forget old dogs and new tricks, clearly it’s never too late to embark upon a new repertoire strand … this was an auspicious start. I reckon the maestro shed 40 years during this performance” The Independent

[Davis] matches Herbert Blomstedt when it comes to grandeur and sense of the long evolving line, and yet the music also seems to fluid and changeable, and alive on so many levels. Full marks to Davis, too, sustaining the momentum through the finale's Adagio fugue in No. 5...Credit too for using the new critical editions of both scores.

Both these interpretations, recorded live at the Barbican, surge along with the full-throated splendour that is a London Symphony Orchestra trademark. In the magnificent Fifth Symphony...Davis's control of pace unfolds a performance of wonderful, unexaggerated drama and humanity, as fine as any I've heard.

At last! Nielsen's two best-known symphonies in modern performances with real fire in their belly...[Davis] brings such animal excitement to the task, such a thrilling sense of discovery and existential danger...Davis shows a remarkable instinct for the paradoxical complexity of the moment in Nielsen, as well as for the broader trajectory of his musical thinking.

This is music in which the creative act is no longer a virtue but a necessity, and it is this unequivocal aspect Davis conveys in a performance which maintains onward drive at all costs...With forward yet sonorous SACD sound that is among the best that LSO Live has yet achieved, this disc bodes well for the rest of Davis's Nielsen cycle over the coming year.

Nielsen's last two symphonies form a response to the first world war and its aftermath...Their uncompromising nature is often fearfully enhanced in this pair of hard-hitting live performances from Colin Davis and the LSO...The playing and recording are both exemplary

Nielsen is still not part of the regular concert-hall repertoire in Britain, but if anything could persuade you that he should be, it’s these vivid and dramatic performances... The London Symphony Orchestra rises to the challenges magnificently, throwing contrasts into high relief, and punching out the rhythms on brass and percussion. Colin Davis conducts expertly.