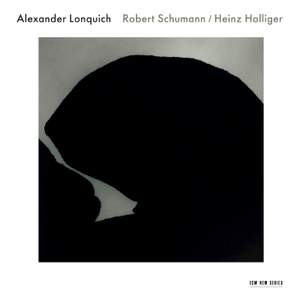 Lonquich's playing is at one with the thinking of both composers...while the piano sound is on a par with ECM's best...this disc is recommended to all devotees of the ambiguity which informs... — International Record Review, April 2011 More…

Pianist Alexander Lonquich delighted many with his first ECM solo recording, the 2005-released Plainte Calme, a recital of Fauré, Messiaen and Ravel. Now he returns to territory with which he is most closely associated, the German musical tradition exemplified by Robert Schumann. Playing the first edition of Kreisleriana (1838) and Swiss composer Heinz Holliger’s “invocation” of Schumann, Partita (1999), he shows the dark nocturnal side of romanticism in juxtaposition with contemporary composition whose “radicalised romanticism” is inspired by it.

Lonquich chose to record the first edition of Kreisleriana rather than the better-known, revised 1849 version because he finds a “special attraction in the fragility of the initial conception”. Holliger says “Schumann is the composer who has almost always been at the true centre of my thoughts.” His Partita is an imaginative continuation of the Schumann style, a “compositional explosion” bringing the mercurial spirit of Schumann into the modern age.

Heinz Holliger is one of the defining composers and instrumentalists of ECM New Series. Releases with his music include Scandinelli-Zyklus, Beiseit/Alb-Cher, Lieder ohne Worte, Schneewittchen, Violinkonzert and Romancendres (also with Schumann as its inspirational centre). His skills as oboist are to the fore on ‘Lauds and Lamentations’ and an album of Zelenka Trio Sonatas, and he’s conducted recordings of Sandor Veress and Zimmermann.

Lonquich's playing is at one with the thinking of both composers...while the piano sound is on a par with ECM's best...this disc is recommended to all devotees of the ambiguity which informs the Romantic spirit, whatever the era.

His performances of both works are muscular, vividly coloured and searching.