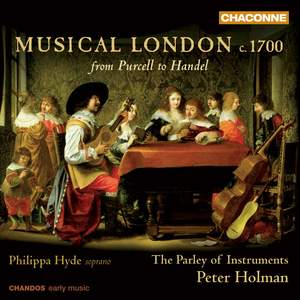 The Parley of Instruments, Peter Holman

Hyde's exciting voice has a consistently warm, unfussy tone over a wide range. She sings without vibrato, strain on the high notes or contrived embellishments. Diction is mostly perfect...The... — Classic FM Magazine, March 2011, 4 out of 5 stars More…

Draghi, G B: Romulus and Hersilia: Where art thou, God of Dreams?

Croft: For rural and sincerer joys

IV. Ground. His arms and voice o'er all prevail

V. Two in one on a ground

Haym: Have mercy upon me, O God

II. Recitative. Have mercy upon me, O God

III. Aria. Wash me thoroughly from my wickedness. Largo

IV. Recitative. Against thee only have I sinned

V. Aria. Behold, I was shapen in iniquity. Andante

VI. Aria. Thou shalt purge me with hyssop. Vivace

VII. Aria. Thou shalt make me hear of joy and gladness. Allegro

The late seventeenth century was a period of great change in English music. This was a time when the influences of Italian music were ever-increasing, brought to England by Italian composers such as Draghi, Haym and Matteis, and their German contemporaries Pepusch and Handel. In this new release we explore how the English composers, Purcell, Weldon and Croft, responded to Italian music and incorporated the style into their own works. The two works by Purcell, Sonata in G minor and The Blessed Virgin’s Expostulation, perfectly illustrate his mastery of the Italian style. This is especially evident in the latter, which Purcell wrote in the style of an Italian cantata.

This distinctive blend of English and Italian influences also became evident in the works of many European composers in England, as they adopted the native English style and form. In fact the English legacy can be heard in the music of Draghi, Courteville, Matteis, Handel, Pepusch and Haym, almost as clearly as in the music of their English contemporaries. Draghi’s sonata is a prime example of this, it seems to have been influenced by English consort music, and its short, contrasted sections and unexpected harmonies are far removed from the sonatas composers were writing in Italy at the time.

The works on this release are performed by Peter Holman’s early music group, The Parley of Instruments, which today is recognised as one of the leading exponents of Baroque music. The Parley’s trail-blazing work in English eighteenth-century music has led to collaborations with soloists such as Catherine Bott, Crispian Steele-Perkins and Elizabeth Wallfisch. On this release, the group is joined by soprano Philippa Hyde, with Peter Holman, conductor and founder of the Parley of Instruments.

Hyde's exciting voice has a consistently warm, unfussy tone over a wide range. She sings without vibrato, strain on the high notes or contrived embellishments. Diction is mostly perfect...The group has the lightest touch in Pepusch's Smallcoal Sonata and a mesmeric grip on dance suites by Weldon and Matteis.

“Tell me, some pitying angel” [is] prettily sung by Philippa Hyde

It looks like a fascinating time, the richness of which could perhaps only be properly revealed by a wisely chosen programme of rarities such as this...Everything is stylish and full of understanding, and Philippa Hyde's voice is clear and strong.

Philippa Hyde is the well-chosen soloist...silvery-voiced, fluent, articulate, agile where necessary, vibrato-lite, she is a pleasure to hear.