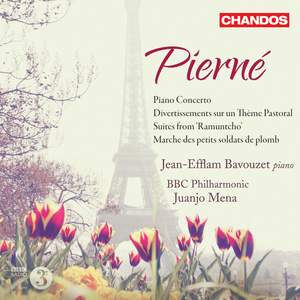 This attractive disc would make an ideal introduction to the charms of Pierné's music...The revelatory heart, though, is the music from Ramuntcho...Inspired by the Basque setting, there is plenty... — BBC Music Magazine, February 2011, 4 out of 5 stars More…

This is Jean-Efflam Bavouzet’s third concerto CD for Chandos, following on from this year’s highly acclaimed accounts of the Bartók Piano Concertos (CHAN10610) and the Ravel Piano Concertos (CHSA5084). Bavouzet is a true master of the French repertoire as can be seen from his award winning complete Debussy series. He is here accompanied by Juanjo Mena – who will from September 2011 be the Chief Conductor of the BBC Philharmonic – in this, his debut recording on Chandos.

Whilst not now a household name, Pierné was a highly respected and very active composer/conductor in his day as well as a key figure in the French musical establishment (he even has a square named after him in Paris). He received the French Légion d’Honneur in 1900 and, in 1910, conducted the premier of Stravinsky’s The Firebird. A pupil of Franck and Massenet, he wrote music with tremendous fluency and all his works were written with a characteristically light, French touch. His style combines the essence of both his key teachers: there was a mixture of the seriousness of Franck and the sensuality of Massenet, and these elements combined to produce a string of very attractive and tuneful orchestral pieces.

Cast in the traditional three movements, the Piano Concerto was completed in 1886. After an imposing introduction, the classical structure of the movement is imbued with a charm reminiscent of Saint-Saëns. A bright and cheerful Scherzando separates this first movement and the brilliant rondo finale, which uses material heard previously in the concerto.

The Suites from Ramuntcho derive from music he wrote for the play of the same name in 1908 by Pierre Loti. Here the story of the Basque smuggler provided Pierné with plenty of opportunities to imbue his score with vibrant Basque colours and rhythms. Whilst the extended overture to the suites is one of his most successful works, other movements such as the lively Fandango and the final Rapsodie Basque are equally appealing, both in terms of melody and orchestral colour.

However, the composer’s most famous work is the once very popular Marches des Petits Soldats (the March of the Little Lead Soldiers) which enjoyed a great vogue up until recent years. This new recording reveals its catchy-charms to new generations once again.

This attractive disc would make an ideal introduction to the charms of Pierné's music...The revelatory heart, though, is the music from Ramuntcho...Inspired by the Basque setting, there is plenty of colour and vigour.

the beautifully focused style of the BBC Philharmonic's line-up of principal woodwind players suits Pierné's idiom to near-perfection...[In the Concerto] Bavouzet delivers its solo part with terrific panache...Mena's handling of pace and mood, though never obtrusive, is beautifully skilled.

[Bavouzet] plays with an enthralling virtuosity...he makes it difficult to imagine a more bright-eyed and eloquent soloist, and his partners work with him hand-in-glove. For all those who delight in a wholly French grace and magic, this disc is a winner, and it is superbly recorded.

[Bavouzet] relishes the concerto's theatrics and has both the digital dexterity and the power to bring them off.

The early Piano Concerto from 1887 and the two suites taken from the incidental music to a stage version of Pierre Loti's Basque-country novel Ramuntcho are the main works here – the concerto a curiously bombastic mix of Saint-Saëns and Tchaikovsky, the ingratiating incidental music full of local colour.

[Mena] gives life to the Basque colouring of the Ramuntcho suites and to the deft orchestration of the Divertissements by Gabriel Pierné...Bavouzet plays [the Piano Concerto] with a nice blend of bravura, finesse and rumbustious charm.