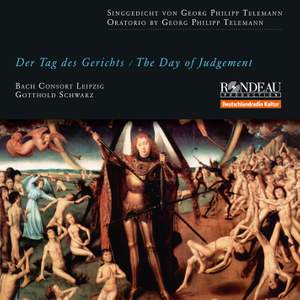 Separately, and as a consort, they project a lively account of music which never falters in respect either of interest or invention...Choruses are projected with clear articulation and, where... — International Record Review, March 2011 More…

The oratorio “The day of judgement” is one of Georg Philipp Telemann’s later works and one of the most Handelian. Its choruses contain impressive writing for trumpets, horns, and timpani. The work is divided into four separate cantatas, or “Reflections”, as the composer calls them, in which the soloists take on character roles such as Unbelief, Reason, Religion, and Devotion. Jesus appears in section three and John is the main character in section four. The work ends in a blaze of glory as “The right hand of God is raised!”

On this recording, the soloists Siri Karoline Thornhill (Soprano), Susanne Krumbiegel (Alto), Tobias Hunger (Tenor) and Gotthold Schwarz (Bass) perform with renowned instrumentalists. Schwarz is the founder and leader of the Bach Consort Leipzig. The principle of the concerto – the correspondence of soli and tutti – is one of the criteria against which the Bach Consort Leipzig measures its interpretations of Baroque music. Their performance aims at a characteristically vocal sound-ideal, clear diction and rhetorical conciseness.

Separately, and as a consort, they project a lively account of music which never falters in respect either of interest or invention...Choruses are projected with clear articulation and, where indicated, with lively dramatic awareness.