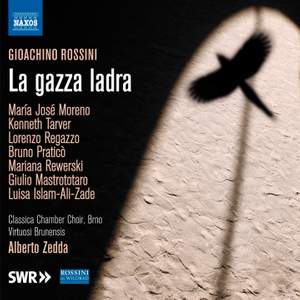 La gazza ladra (The Thieving Magpie) marked a culmination of the convergence of serious and comic elements in Rossini’s work. The result is an ideal hybrid: a tragic opera with a happy ending that rises to the status of true opera seria. With its outstanding dramatic and musical qualities it remains one of Rossini’s greatest and most successful operas, a constant presence in the repertoire since its triumphant 1817 première in Milan. This performance is conducted by Alberto Zedda, who made his conducting début in 1956, produced the first critical edition of La gazza ladra, and is widely acknowledged as one of the world’s foremost authorities on the operas of Rossini. Though La gazza ladra (The Thieving Magpie) is famous for its overture, the whole opera is rather surprisingly not currently represented on many recordings. The unique selling point of our release is the vastly experienced conductor Alberto Zedda, who made his debut in 1956, and who has worked extensively in Berlin, New York and London. Vitally he produced the first critical editions of many Rossini operas, including this one.