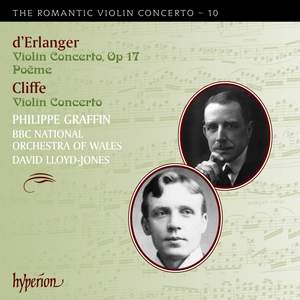 The BBC National Orchestra of Wales under the inspired baton of David Lloyd-Jones play these demanding scores with such glowing sophistication and confidence it seems scarcely believable they... — Classic FM Magazine, April 2011, More…

Hyperion’s Romantic Violin Concerto series reaches its tenth volume, and turns to two composers based in England, and works by them which have lain hidden for decades. This disc provides a fascinating glimpse of musical history and the shifting fashions of the age which made fame such a fleeting thing for so many composers.

Frederic Cliffe had a brief but dazzling career as a composer – his Opus 1 was enthusiastically acclaimed, and he continued to write music for performers including Clara Butt at the peak of her fame. But he disappeared as quickly as he had arrived, and his reputation rests on only six works, including the Violin Concerto in D minor. It was performed by the Budapest-born violinist Tivadar Nachéz, and the finale in particular contains much music in a Hungarian idiom.

Baron Frédéric d’Erlanger was a banker, born in Paris but with a German father and American mother, who moved to London in his teens. He was naturalized British and long resident in London, where he was involved in promoting music and was later a trustee of the London Philharmonic Orchestra. He was also a composer, and although his catalogue of works is not huge, throughout his life there was a steady stream of first performances by the most celebrated artists and orchestras of the day. Many record collectors will have come across him as the composer of the ballet music ‘Les cent baisers’, recorded by Dorati and the London Symphony Orchestra after its success when danced at Covent Garden in 1935.

Hyperion is delighted to welcome back as soloist the popular virtuoso Philippe Graffin, whose earlier outing in this series met with great critical success.

The BBC National Orchestra of Wales under the inspired baton of David Lloyd-Jones play these demanding scores with such glowing sophistication and confidence it seems scarcely believable they had no performing tradition to fall back on. No less remarkable is the sweet-toned advocacy of Philippe Graffin...a thoroughly worthwhile programme of impassioned Victorian delights.

Though neither work is a masterpiece, they're both well worth reviving, especially in such accomplished, sympathetic performances.

Graffin plays superbly, with all the fire and tenderness required, and with glorious tone. The BBC National Orchestra of Wales is as attentive and sympathetic as one would expect with David Lloyd-Jones conducting, and the recording is well judged in terms of balance and perspective.