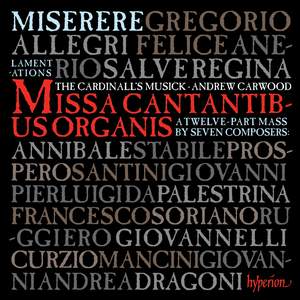 Allegri: Miserere & the music of Rome

The drama and flamboyant colours of Baroque Rome's art and architecture and wonderfully present in this reconstruction of its sacred music. This recording's breadth of moods, devices and styles... — BBC Music Magazine, March 2011, 5 out of 5 stars More…

The Cardinall’s Musick finished 2010 in a blaze of glory with their Gramophone Recording of the Year award for the last volume of their Byrd Edition. Only the second time in thirty years that an Early Music recording has received this prestigious accolade, it is a fitting tribute to the soaring artistry of the group and their director, Andrew Carwood.

Their eagerly-awaited next disc features music from late sixteenth-century Rome and ranges from Allegri’s Miserere, surely the best-known and best-loved work of this period, to a rarely-performed or recorded oddity. Seven Roman musicians came together (or were brought together) to write a Mass-setting where they each contributed different sections. The resulting work, the twelve-voice Missa Cantantibus organis, is a tribute both to Cecilia (the patron saint of music) and to Palestrina. The seven composers each take themes found in Palestrina’s motet of the same name and use them as the starting point for their new compositions. Palestrina himself is among the seven, with Giovanni Andrea Dragoni, Ruggiero Giovannelli, Curzio Mancini, Prospero Santini, Francesco Soriano and Annibale Stabile being the other six. All seven composers were prominent maestri in Rome and most appear to have had contact with Palestrina either as choristers or pupils.

The drama and flamboyant colours of Baroque Rome's art and architecture and wonderfully present in this reconstruction of its sacred music. This recording's breadth of moods, devices and styles is refreshing...More importantly, the vocalists use declamation to emote, transporting the listener from sorrow to transcendent joy.

Carwood's feeling for line and architecture underpins this disc's sublime sounds and divinely spun phrasing...These performers capture the creative confidence of Rome's composing community in the decades either side of the 16th century's turn...It's hard to imagine how its contents could be better served on disc.

What this disc shows...is that they all deserved a better fate than being buried in a list of Palestrina's younger colleagues. It also shows that a burning commitment can lift music off the page and give it real life...this is all really exciting stuff and should be heard by anybody who cares about music of the late-16th century.

This is a really engaging trip to Rome, ancient and modern, familiar and rare, full of changing textures and styles matched by pleasingly varied performances.

The Cardinall’s Musick perform the [Missa Cantantibus Organis] with their usual refinement.

Carwood and his Cardinall's Musick [give] the piece perhaps its finest recorded performance. Using female sopranos as he does is of course itself inauthentic, but Carwood is vindicated by their bell-like clarity and thrilling projection...THe triumphant success of this disc is much enhanced by the vividness of the recording.