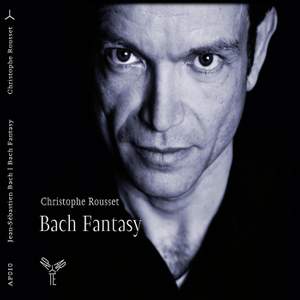 As harpsichordist, conductor, and musical director of the ensemble Les Talens Lyriques, Christophe Rousset is one of the finest interpreters of Baroque music. His first recording for Aparté, devoted to Louis Couperin, was received most enthusiastically by public and critics alike, and collected many distinctions in the international press including BBC Music Magazine Instrumental Choice.

Now at the peak of his maturity, the artist presents an original programme, Bach Fantasy, in which he treats us to little-known works but also standards by the great J.S. Bach. Apart from the important sets of works, including the Goldberg Variations, the Well-Tempered Clavier, the keyboard Suites and Partitas, many miscellaneous pieces by Bach have come down to us in the hand of his pupils and admirers: early essays, pieces of a didactic nature, evocations of emotions, and sometimes all of the above. Christophe Rousset plays these pieces on the 1632 Ruckers harpsichord of Neuchâtel, one of the finest in the world.

Christophe Rousset's new album, Bach Fantasy, reveals the freedom, vigour and improvisatory bravura of Bach's genius through a miscellany of pieces less frequently aired than his canonical keyboard works...Rousset captures the emotional extremes of the teenage composer...[there's] a real sense of live performance - one that, literally and figuratively, pulls out all the stops.

Stylistically and tonally, the variety is dazzling.

Fantasy is the right word for a harpsichord recital superbly played on an instrument built in 1632 and amended a century later. It’s a feisty creature that has warmth and character...Rousset’s mastery is total; every thread of counterpoint dances, crystal-clear, before us. A delightful disc.