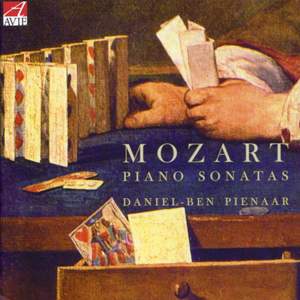 His avowed aim in playing Mozart is to avoid the elegance and gracefulness of traditional performance-practice, and to bring out instead the music's nervous energy. — BBC Music Magazine, February 2011, 3 out of 5 stars More…

Pienaar is a completist. Recent surveys, both on the concert platform and in the recording studio, include Bach’s Well-Tempered Clavier, Chopin’s Complete Waltzes, Schubert’s Complete Sonatas, and the complete keyboard works by Orlando Gibbons. He arrives on Avie with another major project in tow: the complete Piano Sonatas by Mozart. An active recitalist and chamber musician, and professor at the Royal Academy of Music, Pienaar has a number of critically acclaimed independent releases under his belt, but this recording represents and uncommon synergy between artist, repertoire and production values. In Gramophone Award-winning producer Jonathan Freeman-Atwood, Pienaar found a special simpatico which he found “profoundly enabling”, resulting in a creative recording process specific in relation to the music in hand.

Pienaar presents the works chronologically over five CDs, illustrating Mozart’s compositional trajectory which represents all of the major stylistic and emotional shifts in his mature career, with the earliest dating from his twentieth year, through his Viennese period, and the final works which were written towards the end of his all too brief life.

“Daniel-Ben Pienaar's performances are quite simply stunning. The instrument he plays matters much less than his musicianship, which is evident at every turn.” Gramophone

“A kaleidoscope of colours and textures in performances that combined the dramatic with the ethereal, the monumental with the intimate” International Piano

His avowed aim in playing Mozart is to avoid the elegance and gracefulness of traditional performance-practice, and to bring out instead the music's nervous energy.

One factor strikes immediately: there is not a whiff of bygone reverential, even obsequious attitudes to Mozart that still cast faint shadows among some pianists...But as his performance of the Alla turca Sonata, K331 shows, technique isn't allowed to edge ahead of emotional and intellectual depth.

This Mozart...strikes me as one of the most completely satisfying surveys of this still undervalued music ever committed to disc...This is Mozart on the threshold of his genius; Pienaar responds with an astonishing range of expression and colour. I can think of no recent set that takes the music so honestly at face value.