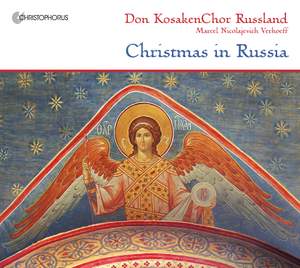 The choir have an amazing sound with the depth and resonance of the low basses particularly striking. I really enjoyed it and it is well worth hearing. — Presto Music, 29th November 2010 More…

Zinoviev: S nami Bog (God Is With Us)

Boris Dodonov: Velichaniye (the Exaltation of the Nativity of Christ)

Alexander Kosolapov: Slava v vishnich Bogu (Glory Be to God on High and Peace on Earth to All Men) [arr. A. Kosolapov]

Archimandrite Feofan: Irmos kanona i malaya ekteniya (the Heirmos of the Canon and Small Litany)

Christmas Eve of the Russian Orthodox Church (on January 6th) is traditionally celebrated in the liturgy of the Christmas Vigil (vsenoschnoye bdeniye). This most important event of the evening before Christmas is a service lasting many hours with much singing and with light processions. The Christmas message was also a source of inspiration for many Russian composers. They created music, which celebrated the depth, pathos and emotion of the Christmas story in all its splendour.

The present recording contains chants from the Christmas Vigil – one of the most beautiful Masses of the Eastern Orthodox rite – with works by the greatest composers from Russia, Ukraine and Bulgaria. In 1921, the unforgettable Sergei Jaroff founded the Don Cossacks choir, which he conducted without interruption until its disbanding in 1979. Under the new political freedom inspired by Gorbachev the Don Cossacks returned to their homeland and the Choir was re-founded in 1992. In order to bring the choir up to international level rapidly, the leading Dutch choir director Marcel Verhoeff was engaged, who, in the shortest space of time, made the Don Cossacks Choir Russia, as it is officially called, bloom as of old. All the members of the Don Cossacks Choir Russia are professional singers and come from old Cossack families of the Don, the Kuban or the Terek.

The choir have an amazing sound with the depth and resonance of the low basses particularly striking. I really enjoyed it and it is well worth hearing.

dark-voiced chant and open-throated choral singing, as far from Anglicanism as nut roast from goose.

The Independent on Sunday 19th December 2010

This is a disc to listen to when the children are safely tucked up in bed: a glittering, incense-heavy Christmas Vespers of stern intonations, defiant choruses, a single, gentle lullaby and bone-shattering bells. Though conductor Marcel Verhoeff is Dutch, authenticity is all