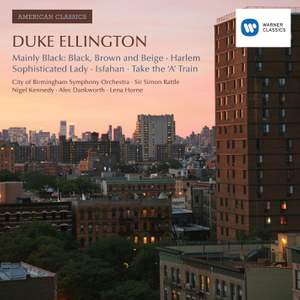 This is the sixth release in EMI's American Classics series, a series devoted to releasing the Company's extensive catalogue of American music of the 19th and 20th centuries.

It was Ellington's long-term ambition to extend the jazz form into something more substantial and one of the first examples was Black, Brown and Beige, a jazz symphony from 1943. Ellington gave it's first performance at Carnegie Hall on January 23, 1943. Four tracks on this disc are taken from a Simon Rattle album devoted to the music of Ellington. The City of Birmingham Symphony Orchestra play Ellington's music as to the manner born: Take the 'A' Train, Sophisticated Lady, Harlem and Isfahan have never been better played except, possibly, by Ellington himself.