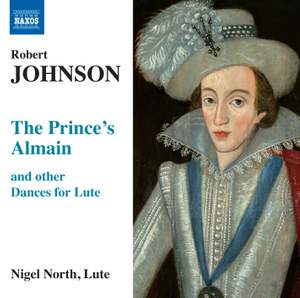 and other Dances for Lute

Johnson's earlier dance music includes galliards and almains, simple pieces largely of melody and bass...North's playing reflects their function, metrical with only the barest slowing up as the... — BBC Music Magazine, February 2011, More…

Johnson, R: The First, Second, and Third Dances in the Prince's Masque

Playing a golden-toned 10-course lute and using original manuscript sources or his own sensitive reconstructions, British lutenist Nigel North presents a delightful recital of dances by Robert Johnson, a contemporary of Shakespeare for whose plays he wrote songs and incidental music.

Although they use the old forms of pavan, galliard, almain and fantasie, Johnson’s exquisite works tend towards the more expansive, lyrical style that would later flourish in the Baroque period.

Johnson's earlier dance music includes galliards and almains, simple pieces largely of melody and bass...North's playing reflects their function, metrical with only the barest slowing up as the dance sequence ends...In contrast to such extrovert movements are the four Pavans, beautifully crafted in often sustained counterpoint...North plays these most thougthfully.

As always, North's playing is a wonder, an easy, natural musicality and an impeccable technique complemented by a real ear for colour and nuance of expression.