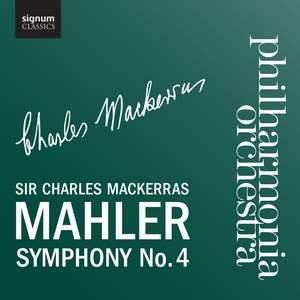 Repeatedly things catch the ear and impress with their rightness. The abrupt, non-transition back to the main theme in the first movement comes as the kind of jolt Mahler surely had in mind.... — BBC Music Magazine, April 2011, More…

Recorded at the Royal Festival Hall in February 2006, the next disc in Signum’s series of live orchestral recordings with the Philharmonia features the late Sir Charles Mackerras conducting Mahler’s Symphony No.4. The concert was a memorable one, as this review of that concert demonstrates:

“This performance was inspired and interesting … Setting off at a no-nonsense, fastish speed, Mackerras’s appreciation of the numerous changes of tempos was a miracle of refined music-making that enhanced the rustic joys of the first movement. What impressed so much was the innate humanity of this music that in other hands can come across as insincere. Numerous details were bought out in the music, not least gurgling bassoons, clarinets suggestive of birds, and flutes that effortlessly floated above the general melee. Each movement received wonderful care for the sentiment that lies behind the notes; the slow movement in particular was of a poise and serenity that was truly touching. The singing of Sarah Fox in the finale embellished the entire sense of naturalness that was enshrined in this memorable rendition, a triumph for the partnership of the Philharmonia Orchestra, on riveting form, and the venerable Mackerras.” ClassicalSource.com

Repeatedly things catch the ear and impress with their rightness. The abrupt, non-transition back to the main theme in the first movement comes as the kind of jolt Mahler surely had in mind. The deliciously abrasive solo violin in the scherzo also feels just right.

The well-prepared Philharmonia strings (slightly reduced in number?) are lean and pristine throughout, albeit with no shortage of portamento, the woodwind and brass notably perky when it comes to illuminating the rustic minutiae of Mahler's invention...Sarah Fox's quick, silvery vibrato comes across with blessed naturalness

It's prime Charles Mackerras, capturing the essence of this symphony in the most memorable and life-enhancing manner as well as a comprehensive roll-call of the myriad qualities that made him such a special musician...The Philharmonia is with him every step of the way...this is quite literally a dream come true and one of the best memorials to a great conductor's art.

No one thinks of Mackerras as a Mahler specialist...yet this account of the Fourth Symphony stands comparison with any currently available on disc...Mackerras's performance has...vivid directness...almost astringent in the climaxes of the first movement, and using a daringly wide dynamic range in the spectral scherzo and the slow movement

The Independent on Sunday 28th November 2010

the concerts played [in Queen Elizabeth Hall] had a special quality as the orchestra and its conductors were forced to rethink balance and timbre. This live recording captures that awkward, edge-of-your-seat magic...with a daringly folksy "In Gemächlicher Bewegung" and a "Ruhevoll" of stunning simplicity.