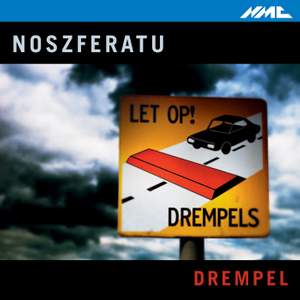 Dave Price makes friendship with a Korean composer the basis of his journey through the "approximate infinity" of communication...Paul Newland draws on Japanese culture with his less-is-more... — Gramophone Magazine, January 2011 More…

Poppy: How the Hammer Felt

Noszferatu formed in 2001. They were originally called Nosferatu but early on faced a legal threat of great ferocity from a goth rock band of the same name and so added the z.

The four members of Noszferatu met at Durham University when they were students in the early 1990s. As well as being heavily involved in the contemporary classical scene they also often collaborate in other musical genres such as jazz, pop, physical theatre and tango.

‘Let op! drempels’ means ‘watch out for the ramp’ in Dutch.

This lively recording by the ‘collective’ Noszferatu represents a cross-section of repertoire by some of the UK’s best experimental composers. From the haunting minimalism of Howard Skempton’s In Tandem and Andrew Poppy’s How the Hammer Felt to the jazz-fuelled improvisation of Finn Peters’ The Horses Screamed and Dave Price’s insanely brilliant Lee’s Game.

This recording will appeal to fans of ensembles such as Kronos Quartet and Alarm Will Sound plus experimental musicians such as Asa Chang and Polar Bear.

Dave Price makes friendship with a Korean composer the basis of his journey through the "approximate infinity" of communication...Paul Newland draws on Japanese culture with his less-is-more study in musical line. Howard Skempton's miniature is as poised as any he has ever written...Let us have more from Noszferatu, and soon.

Listeners to BBC Radio 3 will find themselves in 'Late Junction' rather than 'Hear and Now' territory and varieties of minimalism predominate. Shortest and best as is so often the case is the curiously haunting contribution of Howard Skempton. His three-minute In Tandem forms the still centre of this collection.

Powell’s arresting Drempel, first of the eight items by different hands, combines jazz and the busy figuration of “new complexity” with witty fluency. Andrew Poppy’s How the Hammer Felt is scintillating, happy minimalism...Geoff Hannan’s Bubblegum is a jerky collage of gobbets of “found” material, wryly savouring its disposability.

Noszferatu is a four-man collective of composer-performers, whose interests straddle the boundaries of contemporary classical, pop, jazz and music theatre...Skempton, needless to say, gets it just right with his miniature, while Price's imaginative use of polyglot vocal samples in Lee's Game distinguishes it from the instrumental writing around it