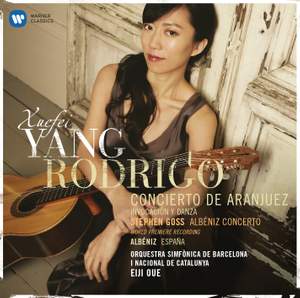 Concierto de Aranjuez has been recorded countless times, but Xuefei Yang brings her own exuberant individuality to it, demonstrating brilliant, fleet-fingered technique in the outer movements... — Classic FM Magazine, February 2011, 4 out of 5 stars More…

Goss, S: The Albéniz Concerto (a concerto for guitar and orchestra after the piano music of Isaac Albéniz)

EMI Classics releases Rodrigo’s Concierto de Aranjuez with Chinese guitarist Xuefei Wang. The album also includes the World Premiere recording of a new concerto by Stephen Goss, Albéniz Concerto, based on four of the composer’s most well-know works for guitar, the rarely recorded transcriptions for guitar of Albéniz’s suite España – 6 hojas de album and Rodrigo’s Invocación y danza, which Xuefei played for her international debut in Madrid when she was just 14 years old.

Concierto de Aranjuez has been recorded countless times, but Xuefei Yang brings her own exuberant individuality to it, demonstrating brilliant, fleet-fingered technique in the outer movements and a subtle flamenco earthiness in the romantic second movement that you don't often hear...she captures all the sunshine and dusty clamour of the music.

Thanks to Yang's synthesising mind, of which her frightening technical fluency and musical intelligence are but two manifestations, this programme works a treat. The Rodrigo concerto is replete with that barely contained explosiveness that recalls Argerich at her best

the performances won’t please all ears: clipped, stark and with a hard sound from the Elias Quartet. It works best in the slow movements, where the strings bring out the sinuous false-relations, and when they temper their austerity with nimble articulation and cheery ornaments. The guitarist, too, seems to shirk from romanticising the music in any way. But it’s all done with crystalline clarity.