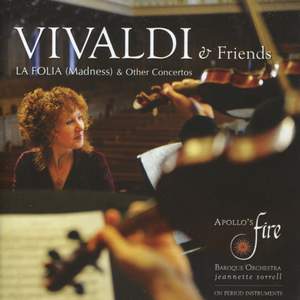 There's a real sense of engagement and fun about this performance. Sorrell's version of La Folia, scored by Vivaldi as a trio sonata, is nicely refreshed by her concerto grosso arrangement...This... — Classic FM Magazine, February 2011, 4 out of 5 stars More…

On 'Vivaldi and Friends', Apollo’s Fire, directed by Jeannette Sorrell, serve up an album of baroque concertos with a twist, just ahead of their UK debut at London’s Wigmore Hall in November.

The Cleveland-based baroque orchestra Apollo’s Fire, with their founder/ director Jeannette Sorrell, has made an indelible impression on the international music market since launching on Avie with recordings of Bach, Mozart and Monteverdi. Vivaldi and Friends is a presentation of concertos by the Red Priest with a twist: two authentic Vivaldi Concertos – one for four violins, the other for two cellos – are interspersed with J. S. Bach’s transcript ion of Vivaldi’s A minor concerto for four harpsichords, and Jeannette Sorrell’s own transcription of ‘Summer’ from the ever-popular Four Seasons. Sorrell’s arrangement mirrors the widespread baroque practice of transcribing violin works for keyboard. In her unique version, she performs the original violin parts on the harpsichord.

The album ends with an enigmatic Tango Concerto by contemporary composer René Duchiffre, written in the idiom of Bach and Vivaldi for the unusual combination of two violas da gamba, and instrument not typically given the spotlight in baroque concertos and to the composer’s mind was unjustly neglected. The use of the Tango, a 20th-century dance form, is a nod to the characteristic use of dance forms during the baroque era.

There's a real sense of engagement and fun about this performance. Sorrell's version of La Folia, scored by Vivaldi as a trio sonata, is nicely refreshed by her concerto grosso arrangement...This makes for a particularly varied and enjoyable programme. Some may find the Tango taking things slightly too far, but others will find it curiously effective.

Jeannette Sorrell's decision to follow Bach's example and do a little arranging of her own is an enterprising one - indeed a daring one when it comes to transforming "Summer" from The Four Seasons into a harpsichord concerto.

Apollo's Fire has become one of the pre-eminent period-instrument ensembles, causing one to hear familiar baroque material anew...the showstopper is the vivid "La Folia": I love the strings' halting introductory bars and the way the ensemble picks up speed, building to dizzying whirls evocative of the Moorish dance it's named after.