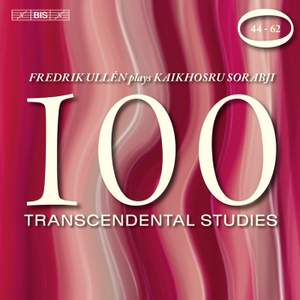 No. 47. Leggiero e a capriccio

Composed between 1940 and 1944, Kaikhosru Sorabji’s set of 100 Transcendental Studies has a total duration of at least seven hours – by far the largest collection of concert études in the known repertoire. It is also among the most technically demanding music written for the piano, often moving in seven or eight or nine parts and at times notated on six-staff systems. Ullén’s traversal of Sorabji’s studies, begun on two previous discs, has been called ‘nothing short of breathtaking’ in International Record Review. On this instalment, the turn has come for Studies Nos.44-62, with durations ranging from less than two to more than fifteen minutes.