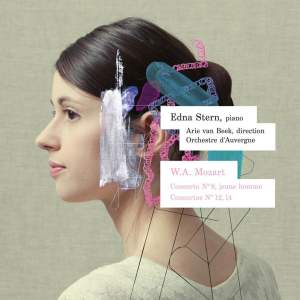 Stern's performances are all about intimacy: intimacy of sound, manifested in a close, dry (and sometimes rather unlovely) recording offering sharp textural clarity and emphasising the tightness... — Gramophone Magazine, May 2011 More…

She chose early Mozart concertos which played many times in a quintet format and for which she rediscovered this chamber approach with the soloist of the Orchestre d’Auvergne. As Mozart left Salzbourg’s archibishop to become an independant musician, his new concertos are a true change compared to the baroque form of concertos where the soloist was at the center followed by the orchestra. Mozart chose a passionate dialogue betwen the piano and individual members of the orchestra, where the piano express its feeling and the orchestra comments them, the winds play at the first person. “Both the level and the nature of the dialogue in K.271 were without precedent. So was the promotion of the wind section to the front ranks of musical diplomacy.Jeremy Siepmann

'In my view the modern piano, with its immense possibilities, can evoke at the same time or successively a whole host of characters and feelings, as in an opera. But it also retains sufficient distance to be able to express itself metaphorically. These characters seem to speak to us, but not in specific terms. Only the extreme precision of their phrasing makes them real and close to us. It’s all there in the notes, with incredible skill in the detail! And that’s what I love in these concertos: a skill that is so poetic and touching.' Edna Stern

Stern's performances are all about intimacy: intimacy of sound, manifested in a close, dry (and sometimes rather unlovely) recording offering sharp textural clarity and emphasising the tightness for the Orchestre d'Auvergne's ensemble-playing; and intimacy of thought, for this is an artist with a delicate touch who likes to shape every detail of phrasing and articulation as if polishing a tiny gem.

Stern’s instrument is modern, though her dry attack and clarity suggest time spent with a period piano. Even so there’s an ease to phrasing and touch in the Jeunehomme concerto...Sparkling music-making