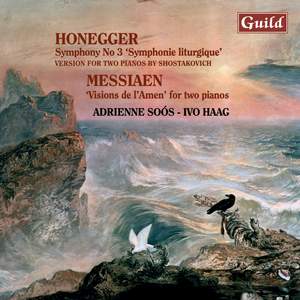 These new recordings form a release of the greatest musical importance. In 1947, Shostakovich travelled to Prague for the Spring Festival, where he heard Arthur Honegger's new Third Symphony, the Symphonie Liturgique. Impressed by the work, he made a version of the Symphony for two pianos for his students in Leningrad which was first published as recently as 2005. This previously unknown important transcription by Shostakovich is here recorded for the first time, together with Messiaen's 'Visions de l'Amen' - the premiere of which was attended by Honegger in Paris in 1943. The result is an album that will garner world-wide interest.