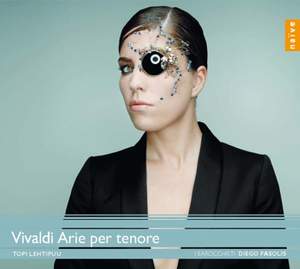 Vivaldi's music is so rhythmic and vibrant it can even sound vaguely upbeat when portraying tragedy, so hats off to Lehtipuu for the amount of light and shade he manages to bring to the programme...The... — Classic FM Magazine, February 2011, 3 out of 5 stars More…

The 40th title in the Vivaldi Edition series showcases a new signing for Naïve, the young Finnish tenor Topi Lehtipuu. It’s also the first time the label has dedicated a full recording in this series to the repertoire for tenor. Some of the composer’s most popular tenor arias – from 11 different operas – are featured and once again the incredible strength of variety in Vivaldi’s art is apparent.

One of the most acclaimed new tenors on the operatic stage, Topi Lehtipuu was born in Australia, grew up in Tampare in Finland, studied at the Sibelius Academy and made his debuts in Helsinki, at the Savonlinna Opera Festival and at the Théâtre des Champs Élysées before taking up residence in Paris. Appointed Music Director of the Turku Music Festival from 2010 to 2013, he is mainly sought after for his fine interpretations of contemporary and early music, as well as the major Mozart tenor roles. He often sings under the batons of Emmanuelle Haïm, René Jacobs, Paul McCreesh, Riccardo Muti, Christophe Rousset, Sir Simon Rattle, Esa-Pekka Salonen and Jean-Christophe Spinosi.

An excellent Tom Rakewell in Stravinsky’s The Rake’s Progress conducted by Vladimir Jurowski at Glyndebourne this summer, he will appear in Mozart’s La finta Giardiniera in Vienna during November. His role in the Naïve recording of Vivaldi's La fida ninfa was much praised and he’s also part of an exceptional cast in the soon-to-be-released Naïve/Vivaldi Edition opera recording, Ottone in Villa. See the new Vivaldi website www.antonio-vivaldi.eu

Vivaldi's music is so rhythmic and vibrant it can even sound vaguely upbeat when portraying tragedy, so hats off to Lehtipuu for the amount of light and shade he manages to bring to the programme...The choir sounds gorgeously light and youthful...I Barocchisti shine when given centre stage for their Concerto ripieno.

Lehtipuu conjures up the raging beast [of 'Va per selve'] with gusto, and he is good at furious jealousy in another aria composed for Fabri, 'Col furor'...Lehtipuu is an engaging singer, and this well-chosen programme does Vivaldi a great service.

I Barocchisti has a liveliness, an energy under Diego Fasolis's direction...tenor, orchestra and, of course, music are worth hearing.