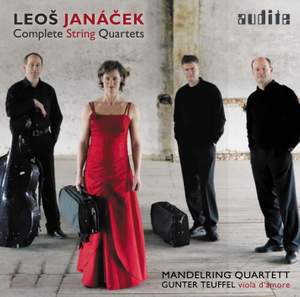 For Janacek collectors, this is of course an enthralling disc, and one to engage the attention of anyone gripped by the passionate, even violent interactions of Janacek's life and his music — International Record Review, December 2010

Both Janacek’s string quartets, alongside works by Schoenberg, Berg and Zemlinsky, form the pinnacles of modern chamber music in the inter-war period.

Janáček composed the quartets in 1923 and 1928 respectively and gave them revealing sobriquets. ‘Kreutzer Sonata’ for the first quartet refers to a novella by Leo Tolstoy in which the emotional power of music is held responsible for a matrimonial drama. If this quartet was secretly addressed to Kamila Stösslová, the object of Janáček’s adoration in his later life, then the sobriquet of the second quartet, ‘Intimate Letters’, refers rather openly to the same addressee. The composer reinforced this amorous subtext by using an instrument which has love in its name: “The whole thing will be held together by a special instrument”, Janáček wrote, “it is called viola d’amour – viola of love.” Janáček was fascinated by the silvery sound of the richly decorated instrument in the viola register. For practical reasons he had to dispense with the viola d’amore and adapt the work for an ordinary viola but for this recording, Gunter Teuffel and the Mandelring Quartet have reconstructed the original setting, offering Janáček’s second string quartet in both versions, for viola as well as viola d’amore.

For Janacek collectors, this is of course an enthralling disc, and one to engage the attention of anyone gripped by the passionate, even violent interactions of Janacek's life and his music