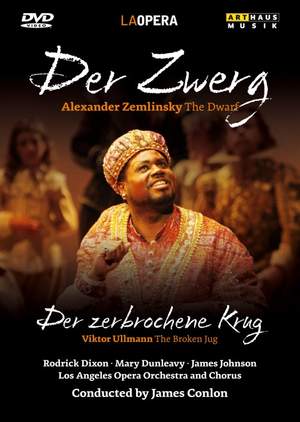 The first fully-staged productions of the LA Opera House ground breaking Recovered Voices project, highlighting the works of composers affected by the Holocaust.

A double bill of one-act operas: Viktor Ullmann’s Der zerbrochene Krug, taken from a comedy by the Romantic German poet Heinrich von Kleist, and Alexander Zemlinsky’s Der Zwerg, based on Oscar Wilde’s powerful tragedy The Birthday of the Infanta.

The music of Alexander Zemlinsky and Viktor Ullmann remained buried for decades in the wake of the destruction wrought by the policies of the Nazi regime. Dozens of composers and thousands of compositions are still largely unknown to musicians and lovers of classical music and opera.

“Full recognition of their works and genius still awaits Alexander Zemlinsky and Viktor Ullmann, more than sixty-five years after their deaths. Their works, in their very different ways, are powerful, vibrant, life-affirming and tragic in turn. They pulsate with the complexity of the human condition. Their lives and personal histories were tragic, but their music transcends it all. It is for us to appreciate their story in its full historic and artistic context.” James Conlon