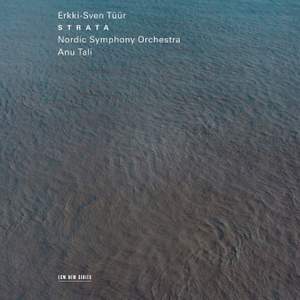 Like his older Estonian contemporary, Arvo Pärt, but much less austerely, Erkki-Sven Tüür seeks to communicate feeling as directly and engulfingly as possible...the elemental force with which... — Gramophone Magazine, February 2011 More…

The album Strata presents large-scale music for orchestral forces from highly regarded Estonian composer Erkki-Sven Tüür – his Sixth Symphony and Concerto for violin and clarinet. It is Tüür’s fifth ECM New Series album with compositions that are, in his words, “abstract dramas in sound, with individual characters and an extremely dynamic chain of events; unfolding in a space that is constantly shifting, expanding and contracting.”

Introduced on ECM with the 1996 release Crystallisatio, Erkki-Sven Tüür has come to be one of the most celebrated of Estonian composers, after Arvo Pärt probably the most widely-played internationally. Strata an album of great power, recorded in Tallinn at the Estonia Concert Hall, is certain to widen Tüür’s following. The album is also an ECM debut for charismatic Estonian conductor Anu Tali and the Nordic Symphony Orchestra (which she co-founded). Originally projected as a Finnish-Estonian undertaking, the orchestra has grown to include outstanding players from 15 countries.

Soloists on Noēsis are German clarinettist (and composer) Jörg Widmann and his violinist sister Carolin, two of the most distinguished instrumentalists of their generation. Carolin Widman has received praise and prizes for her ECM recordings of Schumann’s Violin Sonatas (476 6744) and her 20th century recital disc Phantasy of Spring (476 3310). An album of Jörg Widmann’s compositions is scheduled for New Series release in 2011.

“Tüür charges his scores with a primal energy that reaches past its textural complexity to speak directly to the listener.” Martin Anderson, International Record Review

Like his older Estonian contemporary, Arvo Pärt, but much less austerely, Erkki-Sven Tüür seeks to communicate feeling as directly and engulfingly as possible...the elemental force with which Tüür deploys his superimposed musical layers culminates with well-nigh brutalist aggression, as if to represent some seismic catastrophe...these no-holds-barred performance should provide a mind-blowing experience

The performances are outstanding: Anu Tali already has a very high reputation, and this beautifully recorded and produced disc is without doubt another jewel in her crown. She and the Nordic Symphony Orchestra were made for each other

The craftsmanship [of Strata] is obvious, and the textures it generates are often striking...[Noésis is] an exercise in fusion, beginning with the solo instruments as distinct musical entities, and gradually bringing them into a closer relationship. It is beautifully played