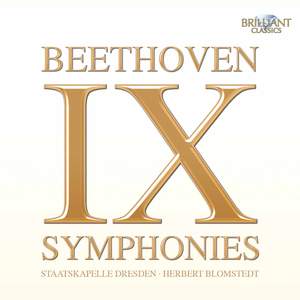 Liturgy of St. John Chrysostom, Op. 31: The Third Antiphon: In Thy Kingdom

Liturgy of St. John Chrysostom, Op. 31: Trisagion: Lord, We Pray that You May Be Merciful

Liturgy of St. John Chrysostom, Op. 31: Ektenia of the Prothesis

Liturgy of St. John Chrysostom, Op. 31: Hymn to the Virgin

Liturgy of St. John Chrysostom, Op. 31: Glory to the Father

Herbert Blomstedt is one of the world’s most famous and respected conductors of today. His Beethoven cycle from the 70-ties still counts among the best. Review from ClassicsToday.com: “10/10”: “Herbert Blomstedt’s Beethoven cycle with the Staatskapelle Dresden is one of the great ones, as much as for the magnificent playing of this finest of all German orchestras, as for Blomstedt’s effortlessly musical interpretations.” Beethoven’s nine symphonies – composed between 1800 and 1824 – are true cornerstones of the classical canon.

Marking an irrefutable turning point in the history of music, they transformed audiences’ expectations of the symphony and influenced the genre’s future development through their experimental, dramatic and expressive weight. Conductors have long been drawn to the profundity of these works: a complete cycle of Beethoven symphonies is viewed as one of the ultimate challenges in the repertoire, and the performances in this set are undoubtedly among the greatest to have been recorded, illuminating the skill of the Staatskapelle Dresden and Herbert Blomstedt, one of the most distinguished conductors of the 20th and 21st centuries. The symphonies trace Beethoven’s development as a composer, from the earlier works that document his emergence from the Viennese tradition, through to his experimental and critically divisive late style. Particularly famed for its landmark status in the history of music is the ‘Eroica’ Symphony (No.3), notable for its innovative approach to sonata form and embodiment of Beethoven’s ‘heroic’ style. Also included are the legendary Symphony No.5, known for its distinctive opening motif and rigorous large-scale structure, the dramatic ‘Pastoral’ Symphony, and the sophisticated Seventh Symphony.

The collection is, of course, concluded by the monumental Symphony No.9 – known as the ‘Choral’ Symphony because of its ground-breaking, transcendent finale, sung here by the Dresden State Opera Chorus and a group of acclaimed soloists. Over 30 years after their initial release, these recordings have remained one of the ultimate Beethoven symphony cycles, a testament to the quality of the performances and Blomstedt’s interpretations. Brought together in a set of excellent value, this 5-disc collection is a must-have addition to the libraries of classical music fans, old and new.