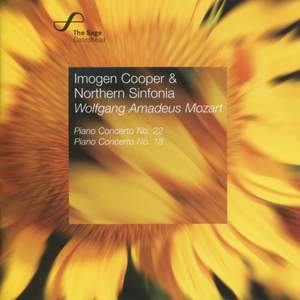 Cooper is alert to every dimension, transcending technique in a synthesis of human emotion, psychological acumen and dramaturgical insight. Her sense of balance is unerring, be it in solo work... — BBC Music Magazine, December 2010, 5 out of 5 stars More…

The acclaimed pianist Imogen Cooper has seen her highly regarded career blossom of late, due to her recordings of Schubert’s late solo piano works and Mozart Piano Concertos on Avie. Most recently her Schubert series has appeared in the Top 10 of the Specialist Classical Chart, and has been hailed by the international media, from the BBC to National Public Radio, and Gramophone to The New York Times. This release is her third of Mozart concertos directing the Northern Sinfonia from the keyboard, an instrument that Cooper selected specially for the spectacular Sage Gateshead when the venue opened in 2004. The synergy between soloist and orchestra results in a poetic clarity that befits Mozart’s late works.

Cooper is alert to every dimension, transcending technique in a synthesis of human emotion, psychological acumen and dramaturgical insight. Her sense of balance is unerring, be it in solo work or in conversation with the orchestra...Nothing is exaggerated, nothing inhibited...With Cooper you have the undiluted essence of Mozart through and through.

As you would expect from this, the north-east of England's chamber orchestra, the playing lies somewhere between big-boned lean 'authentic'. The woodwind and brass playing is a delight, especially the high horn in the first movement of K482, the clarinets throughout K482, and a real dialogue between flute and bassoon in the latter's slow movement.

Clear but velvety tone, perfect voicing of chords, unsleeping alertness to the necessary subtleties of rubato and line, and above all an ability to realise this music's intimate poetry that can make you catch your breath, make these performances the kind that any musician should listen to and learn from.

Perhaps the salient virtue of both performances is that they exemplify how 'period' instruments need not be employed in order to convey style consciousness...Most of all, [Cooper's] playing reminds us of the miracles both works encompass and why Mozart stands as the supreme master of the piano concerto

The latest in Imogen Cooper’s series of Mozart concertos directed from the keyboard and recorded at the Sage, Gateshead, is perhaps the finest so far...As always, her passagework is exquisite — impeccably even yet full of life, never mechanical... The pianist and Northern Sinfonia are like one single, beautifully responsive entity.