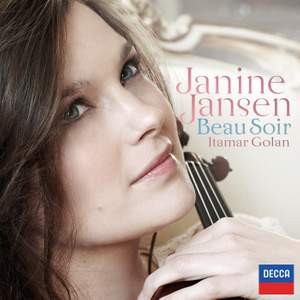 this exquisite recital finds Janine Jansen at her most seductive...what impresses is the beauty of Jansen's hushed playing. The last movements of both [sonatas] fizz and crackle, but these performances... — BBC Music Magazine, January 2011, 5 out of 5 stars More…

Clair de lune (Arr. A. Roelens for Violin and Piano)

For her first recital recording celebrated Dutch virtuoso Janine Jansen has chosen a programme of French music, performed with her regular recital partner, celebrated pianist Itamar Golan: “She's intoxicating, and with Golan as a partner, unstoppable” [The Observer, concert review]

“Beau Soir” - named after Debussy's evocation of evening - takes us from dusk to the moonlit night, from lullabies into sleep, from dreams to awakening and recollection.

Popular classics such as Fauré’s Berceuse and Après un rêve and Debussy's Claire de lune are contrasted with three substantial works; sonatas by Debussy and Ravel, and Messiaen's Theme and Variations.

The album also includes three new works by the widely admired contemporary Swiss composer Richard Dubugnon, whose violin concerto Janine Jansen premiered in Paris in 2008. Now resident in the French capital, Richard Dubugnon acted as a consultant on the 'Beau Soir' album and shares the background to the project in the booklet essay.

this exquisite recital finds Janine Jansen at her most seductive...what impresses is the beauty of Jansen's hushed playing. The last movements of both [sonatas] fizz and crackle, but these performances are about so much more than dazzling pyrotechnics

All the pieces here are beautifully played. Janine Jansen doesn't force her view of the music on the listener, concentrating here on an elegant, sophisticated style, but there's always a flicker of something - a little extra pressure, or a note with faster vibrato - that brings each phrase to life. Itmar Golan shows a similarly lively musical intelligence.

Janine Jansen and her pianist Itamar Golan approach the Debussy Sonata with admirable restraint...[her] sound is beautiful and cultivated