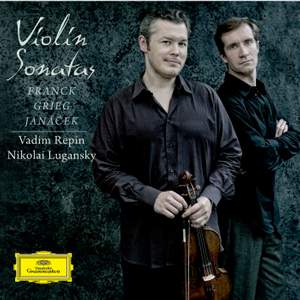 The obvious empathy that exists between these two artists...brings enormous dividends to this warmly recorded programme. It's so easy to become complacent in such a well-worn work as the Franck.... — BBC Music Magazine, December 2010, 5 out of 5 stars More…

David picks out some of the finest recordings of Belgian organist-composer César Franck.

The overtly emotional Franck sonata is the new album’s centrepiece, and also the work that the two artists have played together most often. By contrast, says Vadim Repin, the “Janáček is the most intimate and emotional music you could imagine. Then the Grieg is another substance again. It’s somehow like 19th-century Mozart – very truthful, natural writing. His emotions are really direct reflections.” And about the recording as a whole, Repin exclaims: ”This is a documentary of two people who perform together and love this music.”

“Fiery commitment and technical aplomb,” declared the New York Times reviewing Repin/Lugansky live, while the Los Angeles Times dubbed them “the high-powered Repin-Lugansky team” and, after a recital including the Franck, the Boston Globe reported that “they left their audience cheering after every piece... Each seems more interested in exploring the personalities of the composers than in making a parade of his own”.

This is chamber music-making on the highest level. Vadim Repin will, of course, continue to perform these three sonatas live, whenever possible with Nikolai Lugansky: “I feel a great connection to his sense of phrasing. It is something I can always be confident to be part of, to follow or to take the idea further. We trust each other.” The two artists’ exceptional chemistry and mutual understanding are clearly audible in this remarkable new recording.

The obvious empathy that exists between these two artists...brings enormous dividends to this warmly recorded programme. It's so easy to become complacent in such a well-worn work as the Franck. But Repin and Lugansky overcome any hint of routine...Superb.

The Franck is discursive and lingering, but Repin and Lugansky plot a lucid pathway through its labyrinth of interlocking, dovetailing themes...in the finale [of the Grieg] Repin's pinhead-subtle expressive slides between notes is delightful...Repin and Lugansky match ardent physicality with rare musical intelligence.

it's impossible not to respond to this vital, wholehearted playing

This is one of the finest performances I have ever heard of the Janacek, played with breathtaking conviction and an utterly persuasive grasp of Janacek's idiom...Their new disc is worth getting for this performance of the Janacek alone, but the rest is every bit as impressive

Repin brings great sensitivity to the music, and Nikolai Lugansky deftly handles Franck's formidably difficult piano part (written, like those of Rachmaninov, by a man whose huge hands let him easily reach a twelfth at the keyboard!)

As presented by Vadim Repin and Nikolai Lugansky, Janáček's Violin Sonata becomes unambiguously a late-romantic work, almost overfilled with emotion, and milked for every bit of its expressive...The playing and the sense of ensemble are both magnificent...[In the first movement of the Franck] their playing has much more refinement and a sense of light and shade

Repin’s and Lugansky’s subtlety of expression is a major factor in making this so outstanding, so ravishing and so spine-tingling. Both musicians give of their utmost and, when the musicians in question are Repin and Lugansky, that makes for something exceptional.