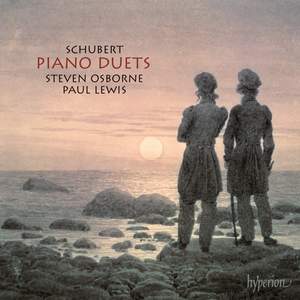 The Lewis-Osborne duo establishes a slyly (or should that be shyly?) wistful mood in the Andante varie in B minor, revels in the bravura writing of the Variations in A flat...and transforms the... — BBC Music Magazine, January 2011, 4 out of 5 stars More…

II. Andantino varié in B minor

Both eminent Schubertians in their own right, Paul Lewis and Steven Osborne join forces for the great Fantasie in F minor D940 and a handful of small-scale works for piano four hands in this captivating contender for my Disc of the Year.

Schubert is unusual and indeed unique among composers in that some of his greatest works are written for piano duet. He wrote as much music for duet as for solo piano, and reaches emotional depths which take this repertoire far away from its domestic origins. The most celebrated of these pieces, the Fantasie in F minor, with its austere yet heartbreaking opening melody and dramatic double fugue, is one of the great piano achievements of the early 19th century. The rest of the works on this disc are much less well-known but equally fascinating.

Who better to commit these works to disc than two of the brighest stars in the British piano scene, Paul Lewis and Steven Osborne? As well as their individual achievements, they also have a long-standing friendship and performing relationship which you will hear reflected in their magisterial performances on this marvellous disc.

The Lewis-Osborne duo establishes a slyly (or should that be shyly?) wistful mood in the Andante varie in B minor, revels in the bravura writing of the Variations in A flat...and transforms the severity of the Fugue in E minor into something ennobling. Such playing suggests that they have found the key to conveying Schubert's magical world of shadows and sunlight.

Two of Britain's finest younger pianists work wonders with the marvels of Schubert's inner landscape...Here are two friends loving every moment of their joint effort. Schubert might have cheered.

Though Paul Lewis and Steven Osborne may not immediately appear stylistically empathetic artists, let me not to the marriage of true minds admit impediments. In this repertoire they are as one, touch and tone indistinguishable from one another, playing with a delicious fluency and obvious affection...this is a Schubert disc to return to and live with.

From the opening thunderclap of 'Lebensstürme' it is clear that great things are in store...No-one with a taste for superlative, passionately committed music-making, ensemble of the highest calibre or some of Schubert's most beautiful music can afford to miss this one.

Their achievement on this disc is really quite remarkable...They have the complete measure of Schubert’s writing - at times dramatic, at times reflective, and at others full of real charm and allure... Textures never sound cluttered and you can always hear the most important melodic line (or lines) clearly. These are two brilliant musicians at their absolute best and is without doubt one of my favourite discs this year.

This brilliantly planned programme is executed with poetry, drama and verve by two complementary pianists who clearly think as one in this sublime chamber music.

Osborne and Lewis predictably reserve their finest, most perceptive playing for the Fantasie, giving its infinitely regretful main theme a different shading on each of its appearances and colouring the work's harmonic shifts and modulations impeccably. None of their performances could be described as routine, though, even when the music is less than top drawer

The quality that shines through in these performances is the way in which Schubert so intuitively judged the special medium of the piano duet...Osborne and Lewis have full measure of its inventive scope on a disc of outstanding, enlivening musicianship.