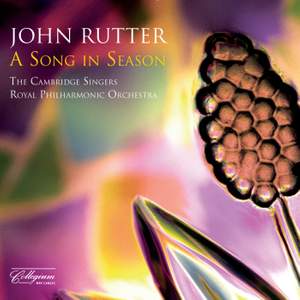 The Wells Jubilate is typical Rutter - brightly melodic, immediately communicative, and well calculated to bring executive satisfaction to the performers...With Rutter himself conducting his... — BBC Music Magazine, December 2010, 4 out of 5 stars More…

Rutter: Look to the day

Rutter: To everything there is a season

Rutter: Carol of the Magi

Rutter: O Lord, thou hast searched me out

Rutter: Most glorious Lord of life

Rutter: Look at the world

Rutter: Lord, thou hast been our refuge

Rutter: I am with you always

Rutter: The King of Blis

October 2010 sees the release on Collegium of a major collection of new choral music by John Rutter, featuring a host of previously unrecorded works in glittering performances by the Cambridge Singers and the Royal Philharmonic Orchestra.

Conducted by the composer, John Rutter: A Song in Season ranges across the church’s year, incorporating music for Christmas, Epiphany, Pentecost, Easter and Harvest.

The first album of new anthems and canticles by Rutter since his landmark 2002 recording of ‘Mass of the Children’, this beautifully-packaged, full-price digipak release promises to delight both seasoned Rutter followers and new listeners.

The Wells Jubilate is typical Rutter - brightly melodic, immediately communicative, and well calculated to bring executive satisfaction to the performers...With Rutter himself conducting his own, outstanding Cambridge singers, these excellently recorded performances have a grip and authority hard to equal.

John Rutter's melodic gift proves as eloquent and natural today as it's always been...Attention to detail and the pursuit of musical excellence run in tandem with Rutter's performances, considerations shared on this recording by his Cambridge Singers and their accompanists.

The hand-picked Cambridge Singers perform with conviction, warmth and poise...This matchless choral feast shows Rutter at the top of his composing abilities. A first-class production.

Rutter's melodic gift never deserts him, and it blossoms here as readily as ever...The performances by Rutter's own choir are full ardent joy and rich, flowing lyricism, and the recording is first class.

No living composer has come to be more closely associated with Christmas than John Rutter...This new recording is superbly performed by the Cambridge Singers & the Royal Philharmonic Orchestra, and if you like Rutter (which I know not everyone does) you won’t be disappointed.