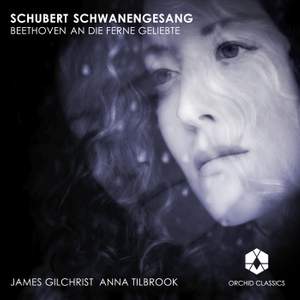 James Gilchrist and Anna Tilbrook take great care to sense the lightness of touch and the emotional fragility of these songs of vernal yearning...The performers' art really does conceal art:... — BBC Music Magazine, May 2011, 4 out of 5 stars More…

II. Wo die Berge so blau

Gilchrist is one of Britain’s most popular and sought after singers. This is the first time he has recorded Schwanengesang and it makes a wonderful and much awaited addition to his extensive discography. Gramophone advertising will support this release. Gilchrist has also recorded “Die Winterreise” for release in 2011.

The CD booklet contains full German texts with English translations, a personal note from James Gilchrist, and an essay by Richard Stokes giving fascinating insight into both Schwanengesang and An die ferne Geliebte.

“he is now unsurpassed amongst lyric tenors in sweetness and technical security, and for his musical intelligence” The Independent

Note in English and German

James Gilchrist and Anna Tilbrook take great care to sense the lightness of touch and the emotional fragility of these songs of vernal yearning...The performers' art really does conceal art: Gilchrist's tenor skilfully voicing a hushed wonder, and Tilbrook's fingers, rid of sentimentalising cliche, moving with the fleet freedom of air and birdsong.

Gilchrist's approach is intelligent, nuanced, accurate and well-enunciated...The best moments, such as the final song of the Beethoven, involve a beautiful, hushed stillness

Tilbrook plays with a touch that seems infallibly to discover the right balances for accompanying figures and melodic strands...Gilchrist is wonderfully skilful in leading his voice through awkward places...He encompasses all moods in Beethoven's amazingly comprehensive mini-cycle, and in Schwanengesang rises heroically to the supreme challenges of the Heine songs.

Gilchrist has that smoothness characteristic of British tenors, but is surprisingly versatile, and his sensitivity to the subtlest nuance is unfailing elegant — as it is in Beethoven’s miniature cycle An die ferne Geliebte.