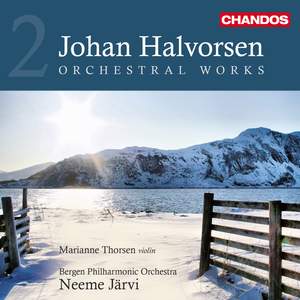 This is music that in less sensitive hands could easily pall, yet here every phrase pulsates with charm and energy, making even the simplest of gestures feel like musical gold. To hear the way... — Classic FM Magazine, December 2010, 4 out of 5 stars More…

Neeme Järvi is back conducting the Bergen Philharmonic Orchestra, with the violinist Marianne Thorsen, in this second volume of Chandos’ series devoted to the orchestral works of Johan Halvorsen. This Norwegian composer, conductor, and violinist was a highly prominent figure in his country’s musical life during the first decades of the twentieth century. The works on this CD are all performed by the orchestra that Halvorsen himself conducted in the 1890s. As in the first volume of the series, they represent Nordic folk-based music at its very best: light and airy compositions with the strings firmly at centre stage. Air norvégien was described by Halvorsen’s contemporary, Edvard Grieg, as ‘a folk-tune medley, but so well done that the result is a piece of art’.

Because Halvorsen spent more than thirty-six years working at the theatres in Bergen and Oslo, a large proportion of his compositional output is music for the stage. The movements of Suite ancienne were originally composed for the play The Lying-in Room by Ludvig Holberg in 1911. The first two movements, Intrata and Air con variazioni, are in the style of late-eighteenth-century serenades, whereas the Gigue, Sarabande, and Bourrée were modelled after baroque dances. Halvorsen himself counted Suite ancienne as one of his finest compositions.

Halvorsen also composed in more prestigious genres and his Second Symphony is commonly regarded as the best of his three symphonies. Nicknamed Fatum, the Second Symphony is inspired by the work’s opening motif which, in the manner of the ‘fate’ symphonies of Beethoven and Tchaikovsky, is heard in all four movements. In the second movement, Romance, a beautiful oboe cantilena is followed by a dramatic development that draws on the ‘fate’ motif, and the brisk main motif of the cheerful third movement, Intermezzo – the fate motif cleverly altered in rhythm – belongs among the most successful, and at the same time most personal, that Halvorsen ever wrote.

This is music that in less sensitive hands could easily pall, yet here every phrase pulsates with charm and energy, making even the simplest of gestures feel like musical gold. To hear the way Järvi magically shapes the theme and variations in the second movement of the Suite Ancienne is worth the price of the disc alone.