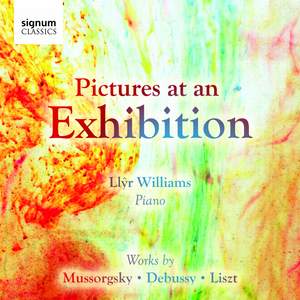 Offer, Pictures at an Exhibition

Williams's technical command confounds the difficulties of 'Baba Yaga' (ultra-clear octaves at full throttle) or 'Ballet of the Unhatched Chicks', taken at a sparkling pace with no loss of detail.... — BBC Music Magazine, December 2010, 4 out of 5 stars More…

Ballet of Chicks in their Shells

The Hut on Fowls Legs

These works are all evocative musical ‘pictures’ of different times and places: from Debussy’s decidedly Spanish Estampes to Mussorgsky’s vivid Pictures at an Exhibition.

Llŷr Williams brings an extraordinary musical intelligence to his interpretations and performances. The 2008-2009 season saw his recital debuts at the Lucerne Festival, in the Wigmore Hall's main recital series and at Carnegie Hall. He was one of the official accompanists for the Cardiff Singer of the World Competition and took part in three Proms concerts: a performance of Stravinsky’s Les Noces, a solo lunchtime recital and a chamber music concert celebrating 10 years of the BBC’s New Generation Artists. He also toured in Europe with Mitsuko Uchida, Christian Poltéra and Martin Fröst, as part of the Borletti-Buitoni Trust's celebration of its fifth anniversary, with venues including the Concertgebouw in Amsterdam and the Queen Elizabeth Hall in London. In February, 2009 he gave a series of four concerts for BBC Radio 3 in Cardiff, to celebrate the opening of Hoddinott Hall: two solo recitals, one concert with the Leopold String Trio, and one with bass Shen Yang. During 2010 he is performing a Beethoven sonata cycle around the UK and giving recitals at the Wigmore Hall, Handelbeurs Concertzaal in Ghent as well as three concerts at the Aschau Festival with violinist Alexander Janiczek.

“few could have expected his performance of Mussorgsky’s Pictures at an Exhibition to be so overwhelming. There wasn’t a finger out of place all evening, and the dramatic plotting was spot on” The Guardian, 2 March 2009, Wigmore Hall Recital

"…one of the truly great musicians of our time. … Those with ears to hear will have followed Williams’s playing as it has grown ever more secure and expansive. The hallmark of his Schumann Fantasy was its rare ability to take us deep into a very private world of dream, while at the same time creating a generously projected and truly virtuoso performance." The Times, 4 April 2007, Hilary Finch

Williams's technical command confounds the difficulties of 'Baba Yaga' (ultra-clear octaves at full throttle) or 'Ballet of the Unhatched Chicks', taken at a sparkling pace with no loss of detail. The quality of his full and rounded piano sound is remarkable, with a wonderful range of colours to draw on - who needs an orchestral version after this?

Llŷr Williams stroll round Mussorgsky's Pictures gets better as it goes along...By the time we get to the "Ballet of the Little Chicks", Williams has got into his stride, proceeding to a truly menacing "Great Gate at Kiev"...Debussy's triptych follows in sensitive, though not always acutely observed, accounts

Williams offers a clear-sighted interpretation, not the weightiest in terms of sound, but deeply rewarding nonetheless. The same qualities of clarity mark out three works by Liszt, the colours Williams conjures glistening temptingly, as they do in the three works that constitute Debussy’s Estampes

in this perhaps unlikely combination of Mussorgsky, Debussy and three pieces by Liszt, the sheer musicality, clarity and rhythmic verve of Williams's playing come across vividly. He makes no excuses for presenting Pictures at an Exhibition in its penny-plain piano garb, and never tries to find ways of compensating for the lack of orchestral colouring