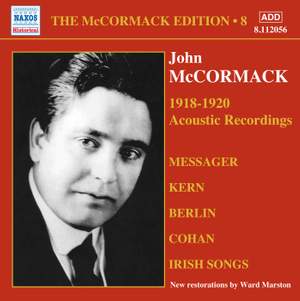 Frederick G. Bowles: God be with Our Boys Tonight

God be with Our Boys Tonight

Cohan: When You Come Back

Florence Methven: The Better Ole: When You Look in the Heart of a Rose

She's a Good Fellow: The First Rose of Summer

Schneider, E: Only You

D. Eardley-Wilmot: Rose of My Heart

Bernard Hamblen: The Road That Brought You to Me

Alma M. Sanders: That Tumble Down Shack in Athlone

Riego: Thank God for a Garden

George Washington Johnson: When You And I Were Young, Maggie

Alstyne: Your Eyes Have Told Me So

Joseph Keirn Brennan: Macushla: 'Tis an Irish Girl I Love and She's Just Like You

Edward Lockton: Beneath the moon of Lombardy

Hughes, H: The Bard of Armagh

John McCormack found extraordinary success as a concert hall artist, being declared in 1918 ‘the most popular singer in the world’ and at one stage selling more records than Caruso.

The 26 recordings collected on this eighth volume of Naxos’s bestselling John McCormack Edition not only illustrate his peerless artistry, they illuminate the world of musical America during the closing months of World War I and its aftermath.

Popular songs from both sides of the Atlantic Ocean give ample scope for McCormack to weave his timeless vocal magic for listeners both old and young.