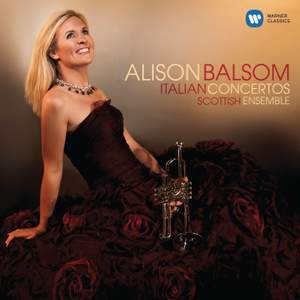 Her playing is breathtaking, first in the bubbling fluency of Vivaldi violin concerto allegros...while her fluent technique elicits some exhilarating tempos. No less arresting is her creamy tone... — BBC Music Magazine, December 2010, 5 out of 5 stars More…

Albinoni: Oboe Concerto in B Flat Major, Op.7 No.3

'She makes the trumpet sing with an irresistible exuberance and eloquence.' With the human voice a particular inspiration in the music of Italy, the words of The Times have a special resonance for Alison Balsom in these works composed or inspired by Italian composers of the 18th century. This collection provides an apt vehicle for the award-winning trumpeter's characteristic brilliance and grace.

Following the popular and critical international success of her Haydn and Hummel concertos recording, Alison Balsom has recorded a programme of Italian Baroque concertos. The album has quickly garnered critics’ praise: “The fast movements are played with sparkling ease and technical brilliance. The slow movement [Balsom] forms delicately, tenderly, yet without denying she’s playing a brass instrument.” - MDR Figaro

After the release of Caprice in 2006, Gramophone wrote, “It's not often that a young musician appears on the scene abundantly blessed with everything both an A&R and marketing person could dream of, but the young British trumpeter Alison Balsom fulfils just such a dream. She's a musician of prodigious talent with an inquisitive, fresh approach to music-making. She is connected to her public, and rewards their attention with playing of a winning ease and fluency. She has an engaging personality … and the intelligence to take her burgeoning career well in her stride.” In this new recording, Balsom, the 2009 Classical BRIT Artist of the Year, plays popular concertos originally composed for the violin or oboe by Vivaldi, Tartini, B. Marcello, Albinoni and Cimarosa, accompanied by the Scottish Ensemble.

“The days are long gone when blowing a brass instrument was a male preserve. Even so, the young trumpeter Alison Balsom remains a singular figure. It’s not that she's long and blonde; it's the roar of her talent that makes her stand out, along with her knack for breaking down barriers and making the trumpet so much more than a toot machine.” The Times

Her playing is breathtaking, first in the bubbling fluency of Vivaldi violin concerto allegros...while her fluent technique elicits some exhilarating tempos. No less arresting is her creamy tone in slow movements...Listening to it is nothing short of a life-enhancing experience.

Balsom takes the first movement [of the Vivaldi] at such a lick that it's over before you know it; but the clarity and precision of her articulation make it an exhilarating experience...Her orchestrated version of an Albinoni violin sonata is notable for some nimble playing in the first Allegro.

Balsom, sweetly accompanied by the Scottish Ensemble, glides through the decorative slides with ease.

suave, characterful performances...Wistfulness and exuberance combined come to the fore in the Cimarosa, while Balsom's clear, focused tone irradiates Albinoni's less exciting Oboe Concerto in B flat with a warmth and intensity that is carried over into the penultimate work on the disc, Tartini's D major Trumpet Concerto

This is above all a disc of virtuoso brilliance, with the soloist performing her pyrotechnics with consummate ease; her tone is bright and open yet possessing a creamy timbre throughout the range...Each of the concertos here presents something to delight the ear.

This cheering disc features the brilliant talent of Alison Balsom and a spruce Scottish Ensemble in six 18th-century concertos...None of the concertos...were originally written for the trumpet. But Balsom’s flawless technique and glorious tone make them sound thoroughly natural.