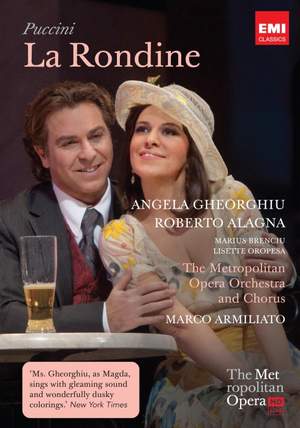 Angela Gheorghiu sings the role of the eponymous swallow with Roberto Alagna as her naïve lover on a new DVD of Puccini’s unfairly neglected opera, filmed at the Metropolitan Opera last year with Marco Armiliato conducting.

Angela Gheorghiu and Roberto Alagna star in the 2009 Metropolitan Opera production of Puccini’s La Rondine (The Swallow). This new production, directed by Nicholas Joël, was the company’s first staging in 70 years.

This elegant romance is the least-known work of the mature Giacomo Puccini. The story concerns a kept woman who defies convention to chase a dream of romantic love with an earnest, if naïve, young man. This Met Opera production features the dynamic soprano Angela Gheorghiu and Frenchborn tenor Roberto Alagna performing the roles of Magda and Ruggero, it blooms into its rightful place in the glorious Puccini canon.

La Rondine (The Swallow) was commissioned by Vienna’s Carltheater in 1913. Due to the impending outbreak of World War I, premiered in 1917, at the Opéra de Monte-Carlo with Gilda Dalla Rizza and Tito Schipa. Set in a Parisian salon, it is the story of Magda, the glamorous mistress of wealthy banker Rambaldo. Her yearning for romantic love compels her into the arms of the ardent and adoring young Ruggero.

The New York Times hailed the Art-Deco set production as “as sophisticated, charming and poignant”. This DVD features the 10th January, 2009 performance of the opera, which was aired globally in HD as well as two bonus interview featurettes: the first with Gheorghiu and Alagna; the second with Lisette Oropesa and Marius Brenciu, who sing the roles Lisette and Prunier respectively.

“Ms. Gheorghiu, as Magda, sings with gleaming sound and wonderfully dusky colorings…The conductor, Marco Armiliato, in what may be his best work to date at the Met, draws a nuanced and supple performance from the orchestra. I thought I knew this score quite well, but have never been so struck by the intricacies of the music”. The New York Times

“I have never heard Alagna sing better, and Gheorghiu is at her sumptuous best. There are comparably beautiful performances by the younger couple, Marius Brenciu and Lisette Oropesa” New York Daily News

at the centre is Angela Gheorghiu in richest, creamiest voice. At her side for most of the time is Roberto Alagna, singing with tone that is resonant if not refulgent...Marco Armiliato conducts with enthusiasm, and the glimpses of scenery-changing reveal a hinter-realm of awesome complexity under unfazed control.

Joël's production...has updated the opera to the 1920s without harming the action or sensibility of the work...Armiliato leads a reading that precisely catches the bittersweet quality of the score without falling into sentimentality; indeed he almost sells it as something other than 'the day off of a genius'.