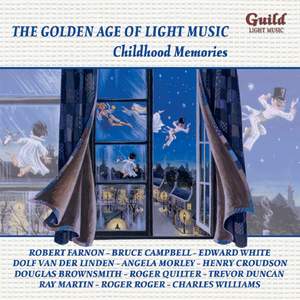 Joseph Engleman: Pick a Back (From Children's Playtime Suite)

Duncun: Children in the Park - Dancing for Joy

Clair: Dance of the blue Marionettes

John Fortis: The Dancer at the Fair

Russell, Kennedy: Parade of the Gnomes

The carefree years of childhood have for centuries provided inspiration for writers and composers, and Light Music has been an ideal genre in which they can exploit their fantasies. Roger Quilter's Children's Overture is probably the best-known work in this selection, but equally enjoyable are the bright and breezy contributions by the likes of Robert Farnon, Bruce Campbell, Edward White, Ray Martin and Charles Williams. Some of these melodies will be familiar to those whose schooldays were in the middle of the last century, when instantly appealing tunes such as these were heard frequently on the radio and in early television programmes.