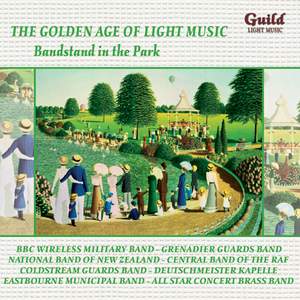 GALM 17: Bandstand in the Park

Monckton: Soldiers in the Park

Rimsky Korsakov: Dance of the Tumblers (from Snegurochka)

Davies, Walford: March Past of the Royal Air Force

N / A: Parade of the Puppets

Wheeler: The Little Clock On the Mantle (Characteristic Piece)

The worlds of military and brass band music are closely allied to light music, with composers and performers in both genres regularly straying into each other's territory. The net result has been the enrichment of both styles of music, and if any proof were needed it can be readily discovered through many of the exhilarating tracks in this collection. Names such as Eric Coates, Archibald Joyce, Ronald Binge, Leroy Anderson and A.W. Ketelbey confirm that genuine musical appreciation recognises no prejudiced boundaries. The music on this CD should therefore both surprise and delight the discerning listener.