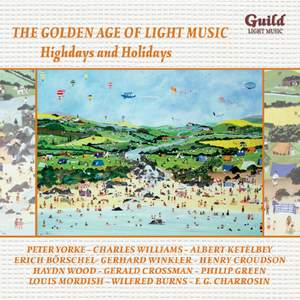 Ketèlbey: In a Chinese Temple Garden

Williams, Charles: Serenade to a Mannequin

Wood, Haydn: Sketch of a Dandy

Keen Light Music fans have often been frustrated to discover that pieces heard regularly on the radio and other media are not available on commercial recordings. The reason in many instances is that the works in question were recorded by publishers for their Mood Music Libraries specifically for use by the entertainment industry. The general public were usually politely, but firmly, refused if they dared to attempt to purchase this tuneful repertoire. Now Guild Light Music has dusted off some priceless gems in the Bosworth catalogue, featuring many of the top composers from around 50 years ago.