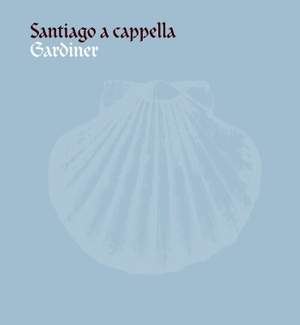 A wonderful collection brilliantly sung. Only Mariam Matrem is a true pilgrim piece, but others (Lobo's Versa est) are a revelation. — BBC Music Magazine More…

Recording of the Week,  Santiago a cappella

Sir John Eliot Gardiner takes us on a journey through medieval and Renaissance Spain as he and the Monteverdi Choir follow in the footsteps of the pilgrims who travelled to the shrine of Saint James the Great.

Soli Deo Gloria is proud to release a sequel to its best selling album to date, Pilgrimage to Santiago (SDG701).

This CD is a journey through medieval and renaissance Spain. It takes listeners from the 14th century polyphonies of the Llibre Vermell (Red Book) of Montserrat – one of the only surviving manuscripts, from a time when music was transmitted orally – to elaborate 16th and 17th century choral music which travelled internationally thanks to the recent invention of print.

During the Middle Ages and Early Modern periods, pilgrimage routes formed part of a broader network of cultural and commercial connections between ecclesiastical institutions in Spain, Portugal and the rest of Europe.

This is an anthology of Golden Age “classics” which would have been performed throughout Europe for centuries. In turn moving, intimate, spectacular and awe inspiring, this sacred music is always uplifting and deeply spiritual.

This is the oldest of two recordings made around the 2004 Pilgrimage to Santiago – a project undertook by the Monteverdi Choir and Sir John Eliot Gardiner for their 40th anniversary. The musicians travelled through France and Spain to perform sacred polyphonies of the Iberian peninsula along the route to the shrine of Santiago de Compostela.

The CD features the same luxurious packaging as Pilgrimage to Santiago. It includes detailed notes by musicologist Tess Knighton.

This album was previously released internationally by Universal Spain under the title Santiago A Capella.

A wonderful collection brilliantly sung. Only Mariam Matrem is a true pilgrim piece, but others (Lobo's Versa est) are a revelation.

...it is a beautifully planned and executed selection, occasionally a little too English perhaps, but recorded at Temple Church in London with just the right amount of warm resonance.

Originally released by Universal in 2005, this features a series of sublime interpretations of Spanish polyphony by the Monteverdi Choir...[Lobo's] "Lamentationes Ieremiae Prophetae" furnishing the centrepiece, its arching long phrases like the vertiginous vaulting of a sonic cathedral.

Prolonged exposure to the solemn polyphony of Victoria, Lobo and Cardoso can be wearing, but it is relieved by more dramatic works from Guerrero. The choir makes a glorious sound.